Almond tofu, aka almond jello or hang yahn dau fu in Cantonese, is a jiggly almond flavored dessert! It’s typically served as a light after dinner treat, and has no tofu in it despite the name.

The cubes of almond tofu look like tofu and have a similar texture, hence the “tofu” in its name. (Same goes for pineapple buns or bō loh4 bāau– there’s not pineapple involved in the bun, even if the top looks like a pineapple!).

Traditionally, almond tofu isn’t even made with almonds, but rather apricot kernels. Since I have a feeling it’ll be hard for the majority of people reading this post to track them down (and that’s assuming you even want to do that work), this version is a little more accessible.

Start the recipe by adding half of the milk to a wide bowl, and sprinkle the powdered gelatin on top.

You can’t use powdered gelatin straightaway, you have to bloom it, which separates the gelatin (so that it doesn’t get lumpy later on), as well as help it swell.

The milk should be cold or room temperature, and yes, this matters.

The first time I tried to make almond tofu, I was following someone else’s recipe where they definitely told me add gelatin to some hot water. Whew, this was a mistake.

The gelatin did not want to dissolve into the hot water and clung to my spoon like a toddler with separation anxiety.

David Lebovitz, ex-pastry chef turned cookbook author, says this is because hot water forces the gelatin to expand before the water can completely penetrate the center of the powdered gelatin.

Additionally, you should sprinkle the gelatin lightly over the entire surface of the milk. If too much piles up together, the gelatin stuck in the middle doesn’t properly hydrate.

This is also why I like to use a wide bowl, since there’s more surface area and less likelihood of the gelatin rebelling.

Let the gelatin sit and absorb the water for 5-10 minutes. Honestly, the Knox site says 1 minute, so 5-10 is to be on the safe side rather than a hard and fast rule.

Then, heat up the rest of the milk. It should be hot to the touch so that it can dissolve the gelatin, but it shouldn’t be boiling, which can weaken the gelatin’s ability to solidify.

Add the sugar, almond extract and salt to the hot milk, and stir until the sugar and salt have dissolved into the milk.

Then, add the hot milk to the cold milk and gelatin mixture, and stir until the gelatin is completely melted. There should be no chunks of gelatin floating around, stuck to your spoon, or at the bottom of the bowl.

Place the lid on the container and refrigerate. The almond tofu should sit in the fridge for at least 8 hours, or until set.

You’ll know it’s set when it jiggles gently without sloshing around like a liquid.

When ready to serve, cut the almond tofu into cubes, then spoon into bowls and top with whatever you would like!

The predominant flavor is almond extract, so if you are not a fan, this is probably not the dessert for you.

Although I just said that the main taste comes from the almond extract, the almond milk also rounds out this flavor (and you can tell when the milk used to make it isn’t almond milk).

It’s a little sweet, but not too much.

The texture is a slightly creamy, despite the fact that it’s basically almond milk, while still being pretty refreshing and light. Definitely a good dessert to serve when you want something sweet without feeling like you need to unbutton your pants!

In these pictures, I used farmers market berries and some brown sugar syrup.

The syrup was made using 2 tablespoons of brown sugar and 4 teaspoons of water. This combo was microwaved until the sugar was dissolved and the syrup was thick enough to slowly drizzle off a spoon (about 1-2 minutes, stirring every 30 seconds).

If berries aren’t an option, oranges or any juicy sweet/tart fruit go nicely with the soft and creamy almond tofu.

You could also use defrosted fruit (maybe cooked into a compote, because you can be fancy like that), or canned fruit, since that’s what I usually ate with my almond tofu while growing up.

If you don’t have any fruit on hand, you could microwave some jam or jelly for 30 seconds, then add a touch of water until it’s drizzly, and use that as a sauce!

Or, you could even use the almond tofu as a topping and add it to a matcha latte, strawberry milk tea or ube coffee! It’s so soft that it would be similar to having egg pudding in your milk tea.

This is the only recipe (as of July 2021) on this site where I wholeheartedly endorse using almond milk. That being said, if you can’t find it, are allergic, etc, you can substitute another kind of milk.

I would recommend a milk that is mild in flavor and homogeneous. Mild, so as not to distract from the almond flavor, and homogeneous so that the final dessert doesn’t separate.

Of the other milks besides almond that I tried, I liked whole milk the best since it fits the above criteria.

Light coconut milk beverage (which is more watery than canned coconut milk) as well as oat milk were not my favorites for their tendencies to overpower the almond flavor, so I can’t say I prefer these options.

Especially the oat milk, which made the almond tofu end up tasting like gelatinous oatmeal instead. Although kind of a vibe for breakfast, not what I was or am aiming for.

If you opt for a milk that isn’t almond in nature, I’d recommend upping the almond extract a teensy bit from 1 teaspoon to 1 ½ teaspoons to help compensate.

The flavor won’t be quite the same since almond extract tastes pretty different from almonds and almond milk (so they serve different purposes in the recipe, flavor wise), but it will still be delicious.

I tend to like desserts on the less sweet side, so the amount of sugar included is on the more conservative side. If you’d like the dessert sweeter, I’d suggest adding 1 tablespoon more sugar, or drizzling the dessert with brown sugar syrup.

If you’re using sweetened milk, I’d recommend decreasing the amount of sugar by ¼.

I would avoid decreasing the sugar more than ¼, since sugar can lend the assist to firm gelatin up, and if you cut too much sugar, you might end up with almond sludge.

I like to use cold water to separate the gelatin granules before hot water gets added.

However, there’s also the sugar separation method, where you mix sugar and gelatin together, and you can add hot water straight to that mix without blooming the gelatin in cold water.

This is how you make storebought flavored and sweetened gelatin packs, since the sugar and gelatin comes pre-mixed and you can add hot water right away.

I tested this method out, since I was curious how the texture would be different from the cold water method, and seeing if it was easier to do this instead.

Though this way might seem faster at the beginning, since you don’t have to wait 5-10 minutes for the gelatin to soften and swell in cold water, the end result isn’t worth shaving off that handful of time. 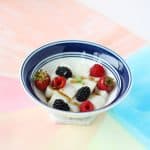 You can use another kind of milk, but you may want to increase the almond extract to 1 ½ teaspoons to help boost the almond flavor if you do so.

If your milk is already sweetened, I’d recommend decreasing the sugar from 3 tablespoons to a heaping 2 tablespoons.

Note that the calorie count does not include toppings.