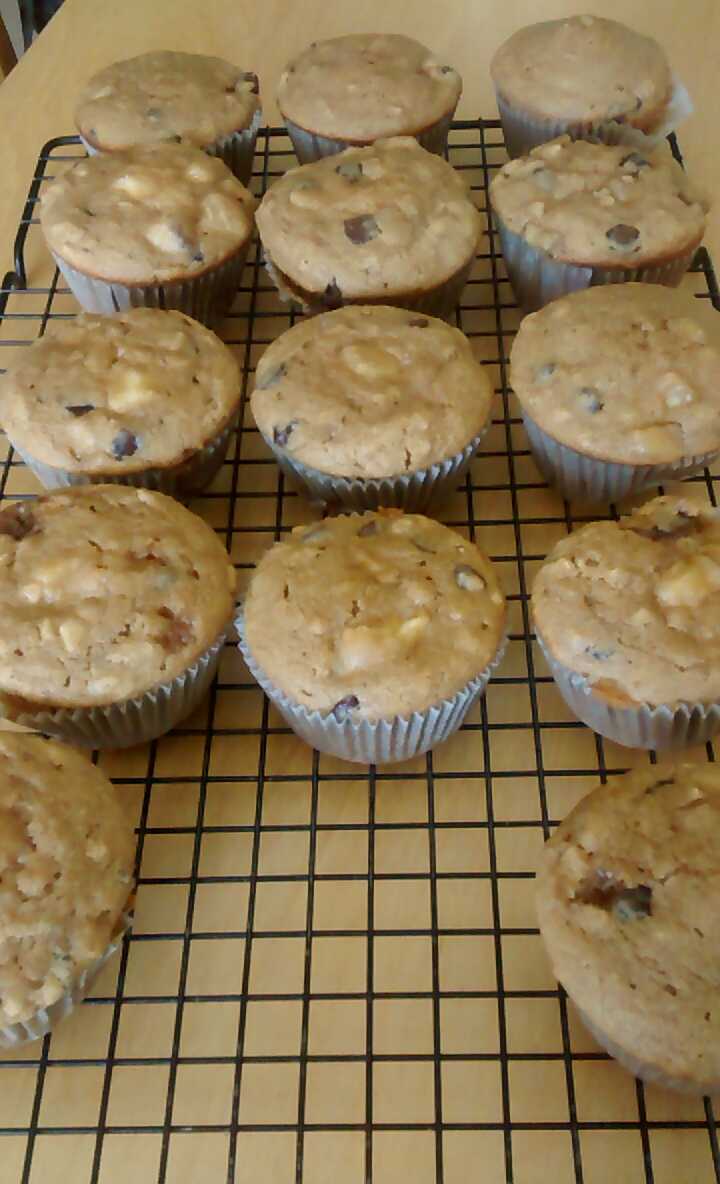 Hermione came over to bake. We had decided on muffins with some sort of banana and/or chocolate before she got here, and I showed her the applicable ones. I was surprised she chose these banana-chocolate-coffee muffins, considering how picky she was, but I wasn’t complaining.

We made a few tiny subs: cinnamon for nutmeg, chocolate for cacao nibs (I made her taste one, and she hated it), homemade buttermilk with vinegar and milk for commercial.

We made 15 banana-chocolate-coffee muffins; you might think that you can make more, but you can’t really. They don’t rise much, so you’re gonna want to fill them all the way to the top. And we forgot to sprinkle raw sugar on each and every one of them. Sigh. They baked for 18 minutes, but dw about some gooeyness- they’re probably pocketfuls of banana sunshine.

I thought the banana chunks would be offputting, but I actually loved them. They were faintly banana-y, though their main purpose was to make everything tender and scrumptious. The oats added a touch of chew and didn’t detract from the rest of the muffin; you could add some more, say ¼ cup, if you want an oatier muffin. The coffee and cinnamon were light accents, something I was glad for because I wasn’t 100% sure how they would work with the banana. I loved how the chocolate stayed molten in fat pools for a couple hours, its creaminess distinguished from the sticky-soft banana. I didn’t miss the sugar on top, but it still would have been yummy. When can you go wrong with sprinkling sugar on top??

These banana-chocolate-coffee muffins are really moist, and I would recommend storing them in the fridge. Even if you’re personally consuming upwards of four muffins per day (which I’m hoping you don’t, but you might want to do like I really wanted to- as it was, Hermione and I each had two muffins as soon as they sprung forth from the oven), I’d do it just to be safe. Pop it into your microwave for 30 seconds, and then you get a warm muffin. The leftover muffin won’t stick as much to its wrapper as a fresh muffin, but if you like the banana chunks, they won’t be as apparent on day two. Dad and I were both a little sad when the bananas said goodbye.