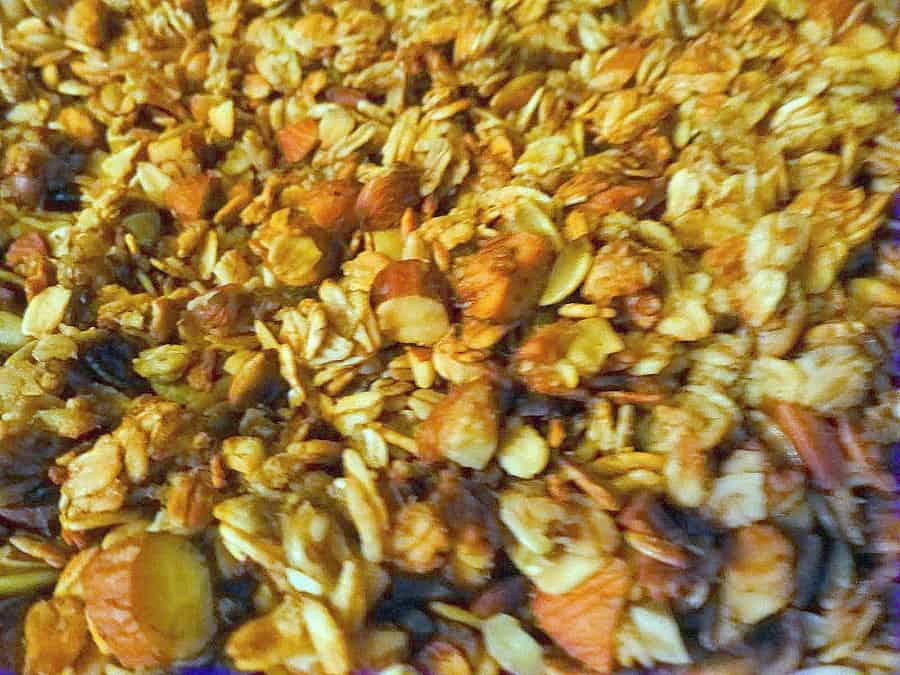 There’s nothing in the house to munch on, and I’ve got a bad case of the munchies. This banana granola is healthy, so it’s totally worth making.

There’s a stockpile of speckled bananas in the freezer. I remember making banana bread in August to help shrink that load, but ended up only using one or two. My dad was surprised to see that almost all the bananas were still occupying precious freezer space. Whoops. That’s part of the reason it’s this granola today, rather than an espresso brown butter variety or a coconut cashew. The banana part is also super interesting to me, since it sounds healthy but still sweet enough to boost the granola.

I used raw almonds and raw pumpkin seeds. They taste nasty, like cardboard, on their own, and are perfect for unloading into granola, where they get toasty and buttery and golden and wonderful. Mmm. I chopped up a heaping ¼ cup of whole almonds, which was a bit of a pain in the butt, considering the fact that they are not flat and like to roll around. If you are tired and want your munchies cured ASAP, I’d suggest throwing slivered almonds in and calling it a day.

The bananas were frozen and I like to touch frozen banana guts as little as possible. They’re mushy and so cold (but I doubt the chill is as bad as when you hold on to a frozen Hachiya persimmon while peeling it; that, my friends, is the absolute pits). I let the bananas warm up a bit before mashing them as smooth as I could with a fork before mixing in the coconut oil and maple syrup. I didn’t worry about the minuscule chunks in my wet ingredients, since I predicted everything would melt together in the heat later.

My coconut oil is solid, since the house is consistently sub-60F. My brother and I don’t feel the cold, and whenever my mom does, which is often, I tell her that Chicago-ans would be thrilled if it was mid-50s in their homes without a heater. Anyways, the oil was solid. I didn’t feel like wrestling oil out of a jar on a Friday afternoon, so I settled for flowing canola oil. I added a bit extra of vanilla to help compensate for the loss of flavor.

I added about 6 T maple syrup. The bananas were on the little side, in addition to adding more almonds that originally called for, so I decided to add a bit more liquid sugar. I tend to like my granola on the sweeter side anyways, and I figured I could always add more nuts for damage control post-baking if necessary.

I love that you blast this granola in a 400F oven. After toasting that applesauce granola for more than an hour in a too-cool oven, the high temperature seemed wonderful. That is, until the fire alarm went off six times into two minutes. It wasn’t even that smoky, but I guess the alarm begs to differ. My arms were ready to protest and run away from all the excessive fanning (which I had to do, despite the fact that I had multiple fans running and various windows open).

My oven does run cold, so I ended up baking the granola for about half an hour. If your oven is normal and you like a softer, more tan versus very toasty brown granola, you can probably scratch by with the 15-20 minute cooking time suggested.

For me, the sweetness level of this banana granola was perfect. There was one banana clump, but the bananas otherwise melded into the granola. The granola was perfumed throughout with a hint of banana that I loved. I’d bake it even longer next time, as the granola was still not quite as toasty and crunchy as I would have liked. Overall, it’s a beautiful, complex-tasting (but easy to make, despite fire alarm issues) granola that your yogurt, if it could talk, would spew praises about.

In a large bowl, combine oats, almonds, pumpkin seeds, vanilla and a pinch of salt. In a separate bowl mix oil, syrup and bananas with your hands until completely smooth. Add to the dry mixture and combine well for about 1 minute, so all is well-coated and clumpy. Spread on a Silpat-lined baking tray. Bake at 400F for 15 to 20 minutes, check at 10 minutes and turn the granola over with a wooden spoon. Cool completely before putting in a container.