i was at a women in tech event a couple of weeks ago. my main takeaway was how incongruent it seemed to talk about confidence and empowerment and equality, and then be handed a giftcard for uber, a place notorious for its mistreatment of the women in its workforce.

aside from that blunder, the other thing that stuck with me was how relatable the content about confidence and unapologeticness was. if someone on the bus is taking up too much room, i shrink into myself or towards the side of the bus, even though they're the one manspreading (or being oblivious). i come up with compromises when i suggest ideas, before any hint of feedback rolls in. sometimes i'm reluctant to be decisive, since i feel like it can come off too aggressive. i've downplayed my accomplishments, even to close friends, because i don't want to seem like i'm bragging. i noticed all these little hints before, but now they appear blaring, and i'm trying to catch myself before i do one of these things, and resist the urge. man, it's hard to undo a habit.

the above lessons could extend to these caramelized mushroom croque-monsieurs: they could be seen as just sandwiches, and that seems so reductive and weakening. especially when there's double cheese duty from stretchy, funky (not all the way to funkytown but close) gruyere to the nutty, slightly golden parmesan that crisps into the prettiest lace pattern when it sticks to the plate. did i mention that there's creaminess from a seriously quick mornay, complete with parmesan woven throughout? the ham is fair game for a usual sandwich, but the toothy mushrooms take it right back to saucy assemblage on crispy bread with cheese fricos status.

and if you want to elevate it even more, what about a croque-madame, which adds a fried egg on top? i personally find these caramelized mushroom croque-monsieurs plenty rich and hearty sans that runny yolk, but you do you.

if you want other carb-y brunch treats, how about some herbed feta and mushroom confit crostini or almond cherry bostock? 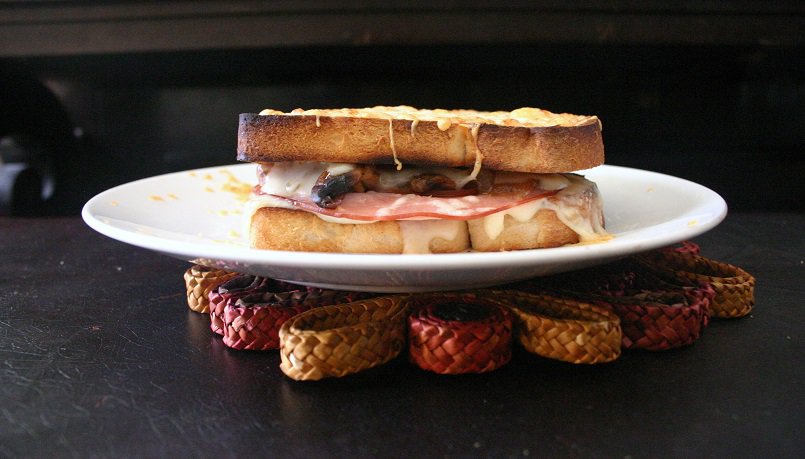