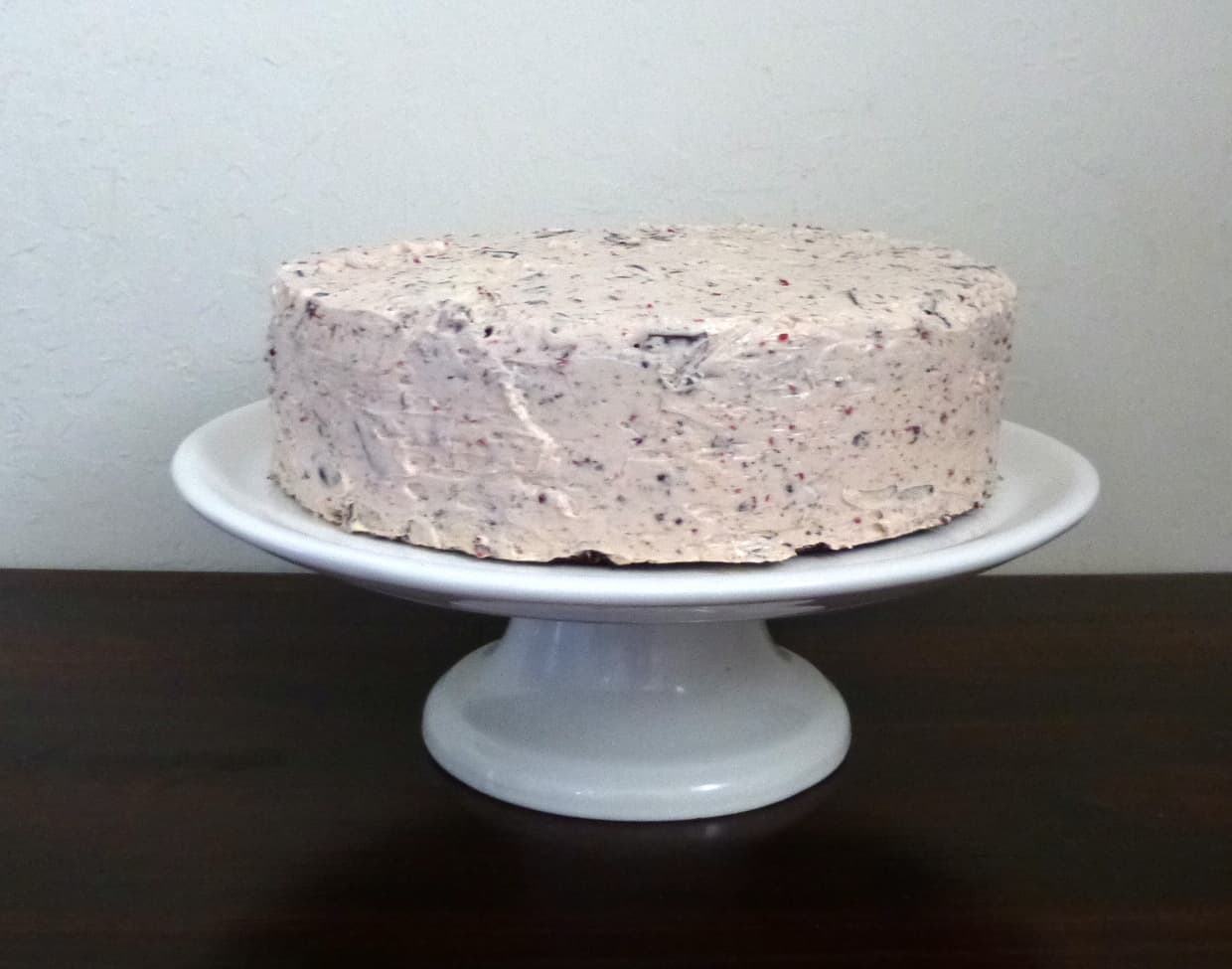 it’s been 11 days since i’ve baked, though the withdrawal hasn’t been too bad. i’ve been busy with a couple clubs (a diy art club i’m an officer for, even though i’m not artsy at all hah and a cultural one where i’ve met some really great, chill people) and getting settled into my new apartment. all fun stuff and i’m so grateful that this year’s welcome week wasn’t nearly as awkward and thumb twiddling waiting for classes to start. ask me next week (quizzes already, ack), and my answer will be different. in celebration of the start of a new school year, here’s a cherry garcia cake.

i didn’t like how much sugar was in confessions’ buttercream, and i wanted real cherries not maraschino. so, half a batch of smbc it was. don’t do half a batch unless you want a very thin coat of frosting everywhere and are willing to patch up lots of parts and you don’t like frosting (uhm you might need to excuse yourself if you’re not into frosting, though). i used cherry jam and finely chopped (otherwise the big chunks are annoying to get around when you frost) chocolate in frosting. (defrosted) frozen cherries got introduced as part of the filling in between the cakes. ignored the ganache and garnished with chocolate shavings instead. either is easy and pretty.

the cake is moist and v chocolatey. this might be my #2 favorite chocolate cake recipe (behind the elisa strauss version which uses a whole cup of strong coffee). i thought that it didn’t have enough cherry, and i’d suggest using more cherries in the middle or melting down some jam and spreading that on the cakes before adding the buttercream and cherries. you could use more jam in the frosting, but i’d be a bit hesitant because too much could lead to the frosting curdling. i didn’t think there was enough frosting; however, my parents liked the cake heavy ratio. so if you like the look of the cherry garcia cake above, use the amounts in the frosting below. if not, double it (and be merry).

Cherry Garcia Cake
adapted from Confessions of a Cookbook Queen, frosting from The Brewer and the Baker
*The buttercream recipe that follows is a half batch; feel free to double it.

Level the tops on the cakes. Split each cake in half. You can spread the cut surface of 3 layers with melted jam, but that’s optional. Spread the buttercream on the same layers, then sprinkle with chopped fresh cherries. Stack them, with the unfrosted cake on top, cut side facing down. Frost the outside with buttercream. Garnish with cherries, chocolate, etc. Refrigerate until ready to serve.