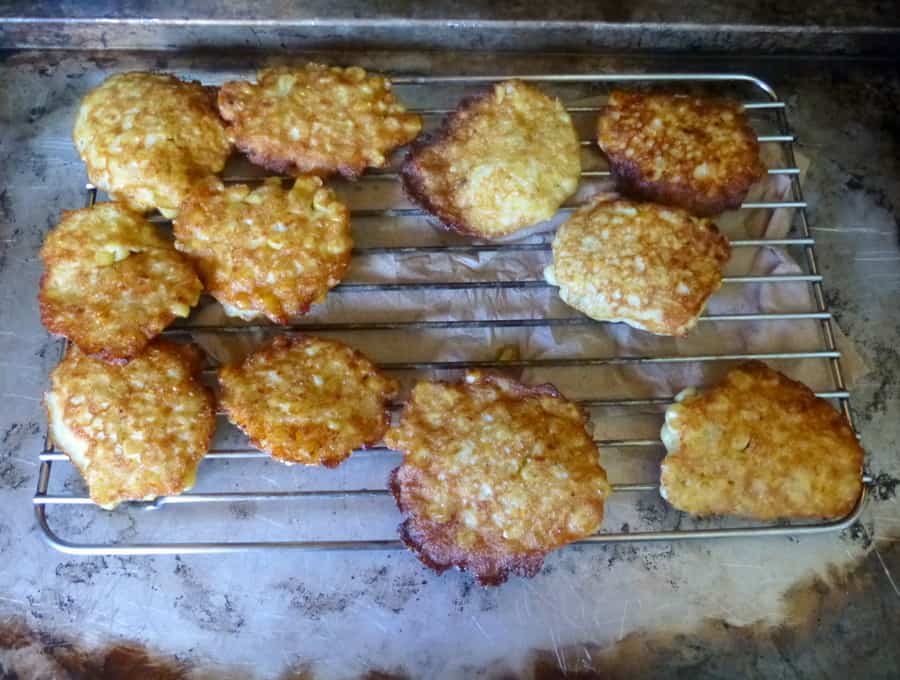 my dad saw this recipe for corn fritters and latched on. i was bored + i never really turn down a chance to bake/cook, so i got roped into helping.

mixed the egg yolks, flour, cornmeal, sugar, salt and pepper first, then added the corn (all of it; we didn’t measure out 9 oz like the og recipe wanted us to do); i don’t think you’re supposed to do that. you see, the first mix got very pastey and clumpy and it was a joooyyyy stirring that into the corn. so really, you should mix the egg yolk and corn, then everything else in. and then when i tried to fold in the egg white, everything got a bit wet. the egg white was weepy, even though dad whipped it just a minute before i folded it into the rest of the batter. whoooo knows.

let’s say this: the more oil the better. if you want crunchiness, you need the oil. the batter absorbs it and gets crispy. sure, they can get a little greasy, but blot them off well with a paper towel or an extra chipotle napkin (the last time i went was in june and i still have extra napkins) and you’re golden (pun not originally intended). so sweet and corny, a little eggy and soft and creamy in the middle, a tiny bit of pop from the cornmeal, a lot of lacy batter edges; these corn fritters are how you should use your summer corn. though i wouldn’t be averse to fresh corn chowder; just drop a container off at my house (;

Corn Fritters
*this recipe was from cooking.com, but the site was shut down in 2016