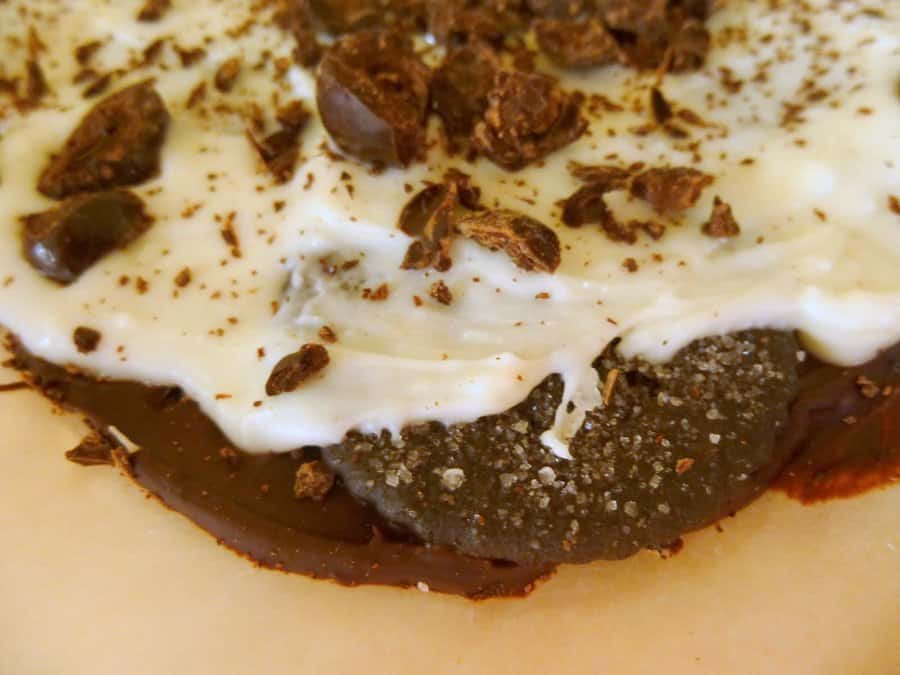 Sometimes, the whimsical buche de noels with espresso Swiss meringue buttercream and walnut brittle and chocolate sponge and marzipan decorations or the mountainous croquembouches with miles of golden spun sugar sound lovely. Granted, it’s a small population who is attracted to making those types of desserts is few (unless you’re a desperate French student in need of extra credit, and there are a lot of those where I live). When I was looking through Gesine Bullock-Prado (yes, Sandra Bullock’s sister)’s gorgeous Sugar Baby, I was drawn towards the magnificent and daring. But now, as my motivation flickers and threatens to burn out, it’s the other, more simple, with a higher yummy-to-work ratio recipes that lure me.

This espresso bark is one such example.

The bark was going well. I spread on the first layer of chocolate in a smooth swath. And then, tragedy. The pan was a bit precarious on the counter, and toppled to the floor. The parchment landed chocolate-side down, only marginally less depressing that a child dropping his/her ice cream cone. I didn’t care about the chocolate too much; I had enough chocolate and coffee (I used instant coffee from a Hawaiian hotel since there was no instant espresso in the house) to make another batch. Cleaning the floor, however, was a pain in the butt as the chocolate started to harden.

Twenty frustrating minutes later spent on the ground, I started on the next batch of espresso bark. I used a baking sheet, so it was easier for me to spread the chocolate around. I think I spread the chocolate thinner than the recipe intended, but that’s okay, since I don’t like super thick layers of chocolate. I also used waayyy more than 12 wafers; I think I used about 30-35. It’s a good thing my mom held my brother off from eating any. I used Mandy’s Dark Chocolate Cookie Thins. I’ve never seen/heard/eaten them before, but they were the thinnest chocolate wafers I could find. I like that they are not too sweet. And although it wasn’t perfect, I didn’t feel like breaking the cookies into pieces to perfectly cover the surface of the chocolate. Forget that!

I didn’t melt the chocolate over hot water baths, and instead opted to melt them in the microwave. The white chocolate cooled before I had the chance to sprinkle on the espresso beans, and I had to melt more white chocolate and spread it on top in order to get the beans to adhere. I did a rough chop on my beans, as they were pretty big.

The resulting espresso bark is chocolate-y and decadent. I love the light crunch of the wafers, and the milky sweetness of the white chocolate. The bitterness of the coffee helps cut through the sugar. It’s yummy, and I think it’d be a great, quick gift for any chocolate or coffee lover in your life.