Upon reading Orangette one day, I stumbled across the fact that Molly Wizenberg would be touring for her memoir, Delancey, and would be at the Ferry Building. Mom, knowing how much I adore Molly, immediately agreed to take me; her motives weren’t completely altruistic, however, since she had been craving Roli Roti’s porchetta sandwich for a year, and vocally expressing the decadence of such a sandwich. But also because Mom wanted to get a copy of Delancey signed by Molly for my mom's co-worker. Who had stood in line for three hours so that Thomas Keller could sign Bouchon Bakery, and we didn’t know until she told us a year after she gave it to us because we hadn’t really looked through it. Whoops.

We got there a little early so that we could check out the farmer’s market and buy the sandwich for lunch. The produce selection was not very exciting; however, I spotted the booth of Tout Sweet, Yigit Pura’s (a Top Chef Just Desserts alum) shop. I literally pulled my mother towards the tables laden with sweets. I loved how many samples they were giving out. The chocolate-covered caramelized macadamia was Mom’s favorite, as she repeated, “It’s so light,” a billion times. The passionfruit marshmallows were astounding, as I had no idea that marshmallows could pack such a wallop of fruit flavor. The brittle was a little sticky on the outside, but delicious nonetheless. We settled on macarons ($1.85 each); one earl grey with chocolate ganache, and one raspberry with oolong. While the flavors were fantastic, I was unimpressed with the texture; they were crunchy, and had none of the chewiness of a good macaron.

The famed porchetta sandwich was fairly easy to get; apparently last time, Mom waited an hour for this sandwich. Thank goodness it took no more than 10 minutes this time. One of chefs handed out samples of the pork rinds while we were in line, and I was transported back to Katz, where the assemblers gave out samples of pastrami. Ahh, good times. 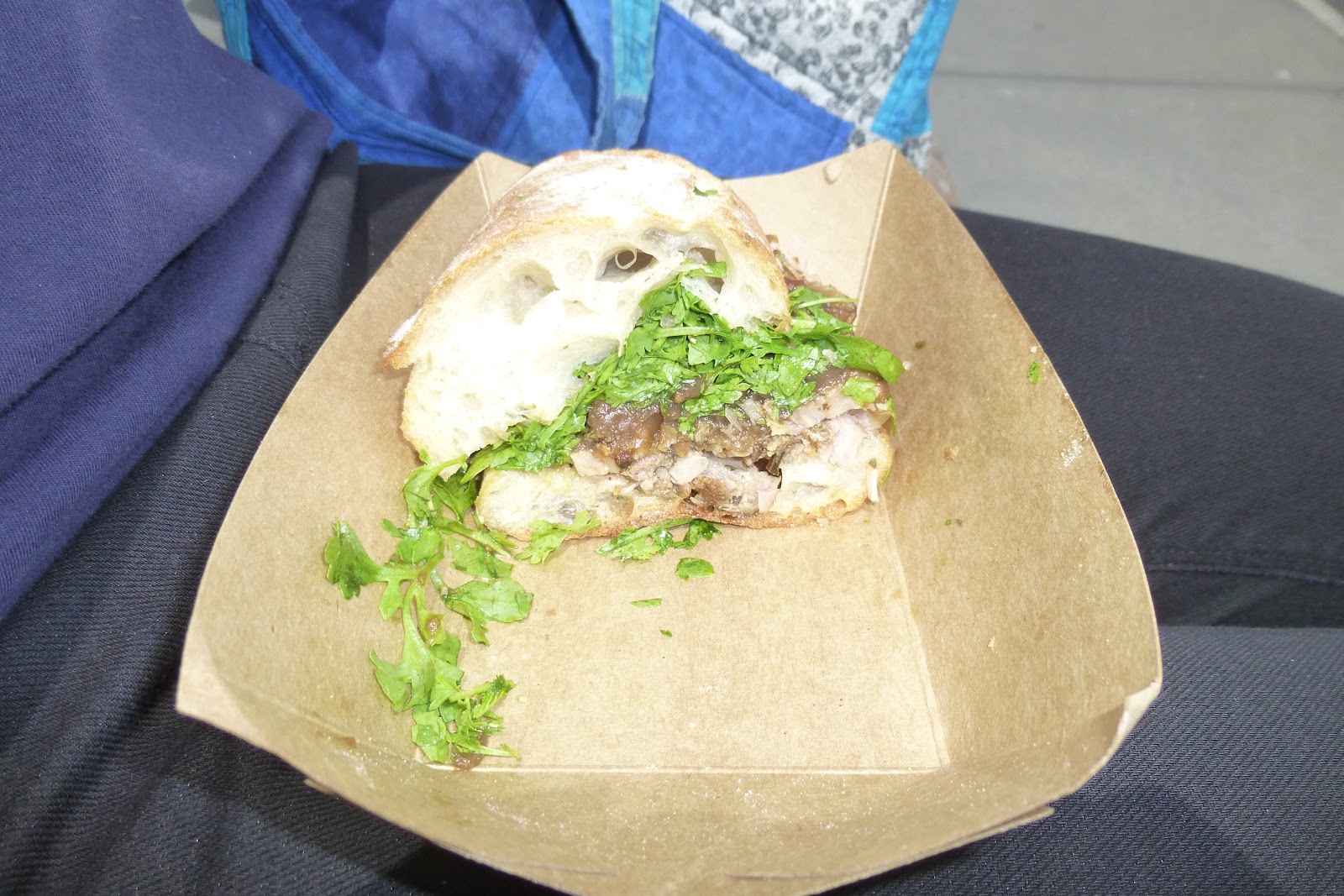 The sandwich is a fairly simple one. You have pork, pork rinds, frisee and an onion compote on a really chewy roll. The pork is uninspiring; it’s a little dry, and a tad bland. The pork rinds, on the other hand, are gloriously crunchy and greasy and oh my. I was expecting the rinds to be detached from the pork, and instead got pork that was reminiscent of the pork that Mom buys at the Chinese grocery store. No bad, per se, but not as awesome as I was imagining. The onion compote was my favorite part. It was sweet, a little smoky, salty. The onions have been cooked for so long that they’re no longer caramelized; they’re jammy, like a compote. The frisee cut through the richness of the pork rinds and onions. The roll was fantastically chewy, and I bet it was Acme bread. Overall, a good sandwich, but I don’t think I could justify spending $9.50 on it again. If there was only the crunchy pork bits, no actual pork, then it’d be a different story.

After devouring the sandwich, it was time to go meet Molly. It turned out to be a Q&A, followed by a book signing. She talked about how being a mom affects her cooking, how Delancey/Essex weaves into her writing, her favorite Spilled Milk episode, etc. Her talk made me want to meet Matthew Amster-Burton, her fellow Spilled Milk host. I have a feeling he’d be very entertaining. 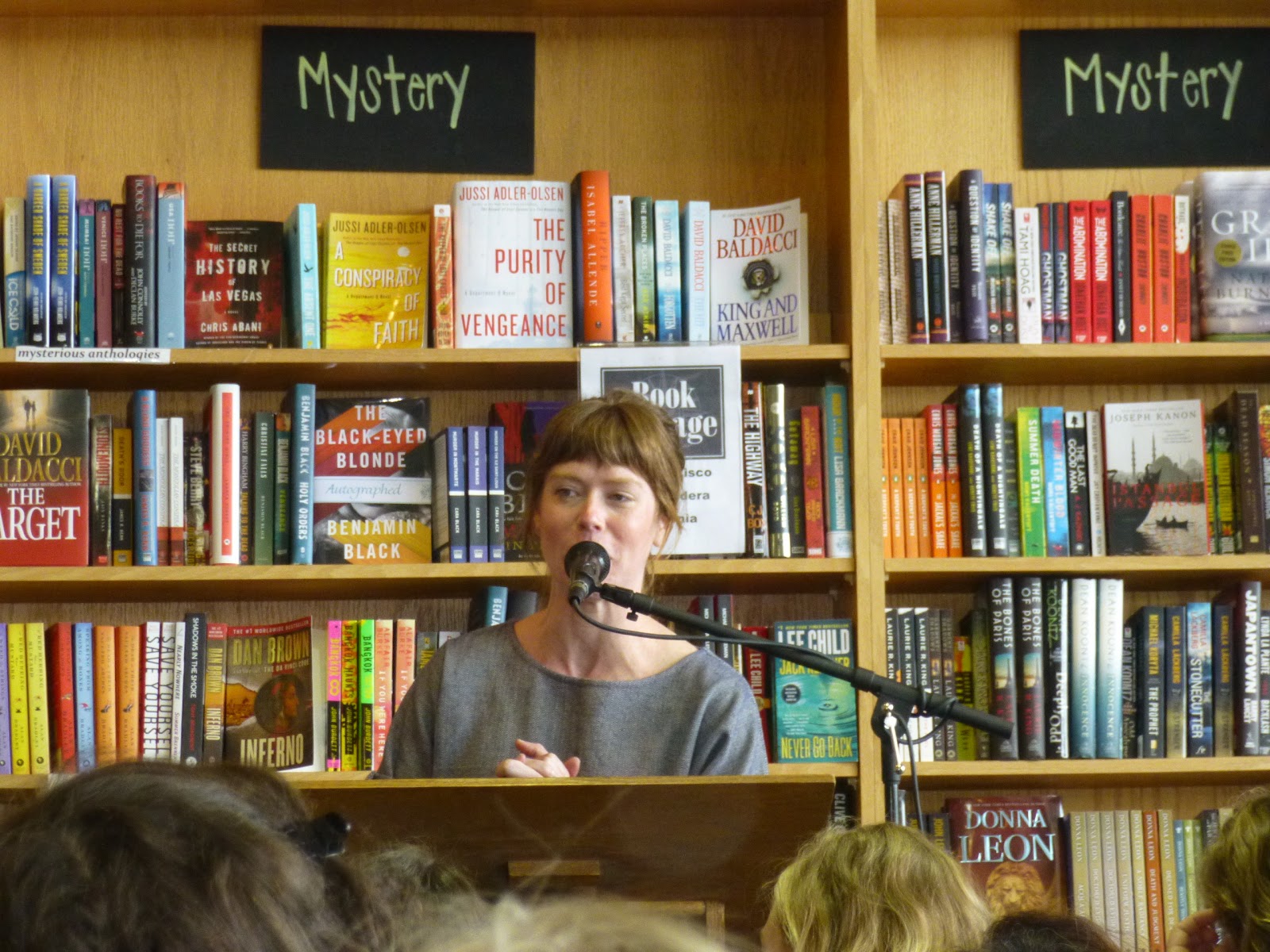 When she was signing books, it was a bit awkward. I’m an awkward person, so that’s probably why our exchange wasn’t that of best friends. What follows is essentially the exchange.

Me: I love Spilled Milk.
Molly Wizenberg: Thanks!
….
Me: I listen to it when I work out.
Molly: Haha, really? Don’t you get hungry?
Me: Nope.
Molly: That’s probably because we don’t really talk about food.
Me: I guess…
…
Me: I start laughing, and everyone looks at me funny when I listen.
Molly: That’s fantastic.

Yes, she’s lovely, but I wish she was more lovely. Sigh. I still left the bookstore beaming like I was in Disneyland, though.

I got a scoop of horchata in a bowl with a cone on top. That’s an awesome idea. The ice cream was a little salty, and very strong. I still prefer Treatbot’s, since its horchata is more toasty and mellow and cinnamony. Humphrey’s wasn’t bad, though. I enjoyed the cone the most.

The day ended with prom. It was one of the best days I’ve had in a while.