This creamy cheesecake is flavored with a lot of guava and a little lime zest, making for a delicious dessert that’s plenty fruity and decadent!

Graham crackers have the best texture for cheesecake crust, hands down. I tried testing out butter shortbread cookies, but they just didn’t have the same kind of crunch that graham crackers did, and the crust ended up soggy.

Use plain ones if possible, since the cheesecake is sweet and flavorful enough without honey or cinnamon.

This isn’t the time to scrimp on fat and reach for the low fat or fat free cream cheese. They both lack the kind of creaminess that your taste buds will miss out on, and using full fat cream cheese makes baking the cheesecake much more forgiving.

This recipe uses full blocks of cream cheese. That being said, if for some reason you end up with extra, you can try making a batch of cheese foam to top your drinks, or this berry granita with mint cheesecake bites!

Guava jam is a must here. It might be hard for you to find (I tried Korean, Filipino and Chinese grocery stores before lucking out at Cost Plus World Market), but I promise that it makes a huge difference.

I did test using guava nectar, since that is more readily available. However, the flavor never quite matched that of the jam, no matter how much I tried to reduce and concentrate the nectar.

A little citrus zest is nice in this recipe too, since it gives the cheesecake a bit of a floral flavor.

Lime zest is my favorite, although it does distract from the guava a bit, so I’d recommend using lemon or orange if you’re afraid of that happening.

First, crush the graham crackers. The finer you crumble them the better, mostly so that the crust will be more homogeneous and it’s easier to cut clean slices of cheesecake.
This is easier said than done, especially if you don’t have a food processor and end up doing some manual destruction, but try your best with a rolling pin, your fingers, a mallet, or anything else you have on hand that might help.

Once the graham crackers are sufficiently broken down, mix them with melted butter, then press into your pie plate. The butter wrapper and/or a dry measuring cup with straight sides are helpful to make the crust as even as possible with minimum stickage and mess.

Parbake the crust until golden and fragrant so that even the crust hidden by cheesecake later on gets a chance to get toasty.

I like to loosely tent the crust with foil, or at least the top edge, since it can end up a little dark by the end of all of the baking.

Then, onto the filling. Whip the cream cheese, sugar and eggs until fluffy and creamy, then stir in a little flavoring: vanilla, salt and some citrus zest.

Bake the cheesecake until it’s mostly set. When very gently jiggled, the middle of the cheesecake should have a bit of a wave to it, but it shouldn’t look like it’s sloshing around.

It’s okay if it looks a little liquidy or underdone, since the cheesecake will keep cooking as it cools.

Turn the oven off, then open it a crack and let the cheesecake cool completely in the oven. Transfer to the refrigerator, and refrigerate overnight before cutting and serving.
Tips – H2 Your graham crackers will probably come in a little plastic sleeve, so why not crush your graham crackers in that before you toss it? Might as well make it a double use plastic instead of a single use.

Cold cream cheese is stubborn and resists smoothing out, no matter if you try to coax or strong arm it into mixing. Room temperature cream cheese is much easier to work with, like a person still in a post-massage glow.

An electric mixer is also highly highly recommended. Even if you have room temp cream cheese, the texture isn’t quite the same for hand mixed vs electrically mixed cheesecake.

You’re more likely to get lumps in the final cheesecake, and it doesn’t get quite as fluffy and airy when you mix by hand.

Having cracks on your cheesecake won’t make it taste bad, but they also won’t be pretty.

The cracks, which form if the cheesecake changes temperature too drastically, can be mitigated in a few different ways:

For this recipe, cooling the cheesecake in a partially opened oven is good enough. Water baths are effective, though they’re kind of annoying when you don’t really need to use them.

You can keep the cheesecake in the fridge for up to a week in an airtight container. Bring to room temperature before you eat it. 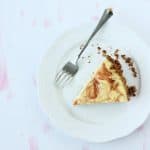 Lemon or orange zest also work for in place of the lime zest.

You can use 1 cup guava nectar, cooked on the stove for 30 minutes over medium low heat and thickened with 1 tablespoon of cornstarch, instead of the guava jam. The flavor won’t be as strong though, so only do this if you’re really in a pinch.