Hojicha is a roasted green tea. It doesn’t have a high level of tannins, so it’s pretty smooth and not that bitter.

Does it have caffeine?

Yes, hojicha has caffeine, though a minimal amount compared to other green teas. Ippudo Tea says that this is due to the usage of the leaves, rather than the (more caffeine-heavy) tips/shoots, as well as the roasting process, which mellows out the effect of the caffeine.

Hojicha theoretically has a low enough amount of caffeine that you could drink it at night, but if you’re paranoid and/or a caffeine lightweight like me, maybe try out this decaf sleepytime tea latte or a mug of black sesame latte instead.

It has a strong roasted flavor (genmaicha, a green tea with toasted brown rice, is on a whole other planet, since this is mild compared to hojicha), almost smoky.

It’s so strong that I would recommend storing it alone, away from other tea (unless you want the less assertive teas tasting of hojicha, reminiscent of accidentally keeping your mint or peanut butter candy with the rest of your Halloween haul).

How to Make a Hojicha Latte

First, make a tea concentrate by steeping hojicha tea leaves or tea bags in hot water until it’s dark (darker than you would want if you were drinking the hojicha plain).

Mix in heavy cream and soy milk (any kind of milk is fine, whether it’s dairy or non-dairy). I use a combo of milk and cream, since only cream is a bit much for me, and only milk is a little too watery.

Alternatively, you could sub the hot water in the first step with milk, and omit or cut down on the cream. I first heard about this method from Jun and Tonic, and it’s my go to way for making milk tea when I want to have it with boba these days.

I like to top the hojicha latte with a hearty dollop of red bean whipped cream (sweetened, cooked red beans folded into whipped cream). This is entirely optional, but I am a stereotypical Taurus who enjoys being extra, so I highly recommend.

You can cook the red beans yourself and season with brown sugar to taste, or pull up to any Asian grocery store and grab a bag/can of pre-made sweetened and cooked red beans (any texture is fine). Either works for this recipe.

What does hojicha pair well with?

Because hojicha on its own can be a little overpowering, I like mixing the tea with some milk to make it into a hojicha latte. A little cloud of red bean whipped cream on top adds a touch of sweetness and decadence.

I think coconut would be tasty, especially if you use full fat coconut milk, and you can use that instead of heavy cream and soy milk.

Strong, creamy milk tea. If you’re a clone of my mom and prefer your tea on the milder end of the steeped spectrum, this is a good way to have your hojicha and drink it, too.

I tend to make (and order; 50-75% sweet at boba shops please) my drinks less sweet, so having a lightly sweetened whipped cream with an unsweetened latte is perfect.

Not sure who would be asking, but if you’re demanding, describe this drink in vibes, then I got you. This reminds me of hibernating at home back when it was a choice (hahahahaha), binging Dash and Lily and burrowing under cozy blankets on rainy afternoons.

What’s the difference between hojicha and matcha?

Hojicha is roastier in flavor, compared to matcha (and matcha lattes, no matter if you add rosewater or coffee or fruit or earl grey tea), which is more grassy and refreshing. Hojicha is a dark reddish brown color, while matcha is bright green, so imo, matcha is more fun to play with if you’re trying to make a layered drink.

The texture is also different, since hojicha is typically sold as tea leaves, whereas matcha is usually found in powdered form. You strain out the hojicha before drinking the resulting tea, whereas you consume the matcha powder without removing any of it from the tea.

Hojicha has less caffeine than matcha, so you can gamble with hojicha at night, but matcha at 10pm would be a questionable move if you’re sensitive to caffeine. 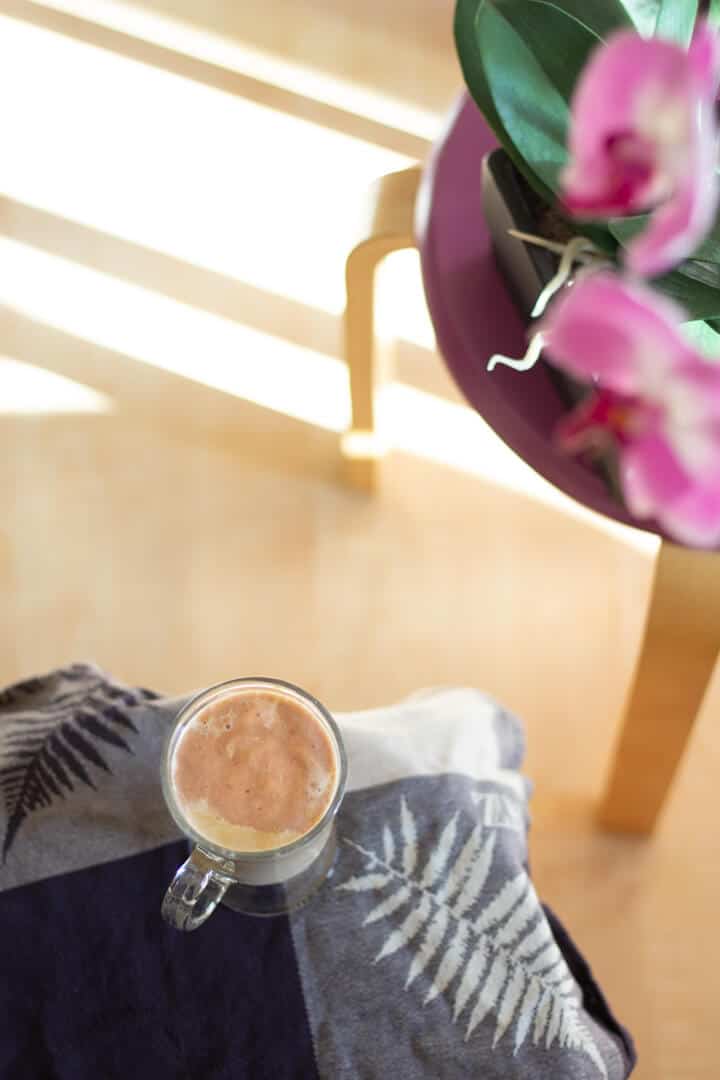 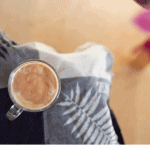