This lotus seed and egg soup is a super cozy and comforting Cantonese dessert, perfect for a cold winter night!

This recipe might require you to visit new grocery stores (or at least new aisles) to find some of the ingredients.

The lotus seeds and snow fungus (aka white fungus) are probably the hardest things to find, but with a little bit of luck and a quick Internet search (or a peek at the picture below), you should be able to find them in the dried section of a well stocked Chinese market.

I looked briefly at a smaller Korean grocery store and couldn’t find either there. I’m not sure if it was because these ingredients are not used in Korean cooking as much, or if the store was too small to stock them.

I’m sure you could find them online too should you strike out at your local Asian grocery stores.

Anyways, both the lotus seeds and snow fungus need to be soaked before you cook with them. Pay with a little time and patience, and you can get rid of any undesirable bits and ensure that they’ll be soft enough once you’re ready to down some tòhng séui.

The lotus seeds might contain a bitter little sprout, and it’s easiest to check the inside of each after soaking them. The lotus seeds are tough straight from the bag, and it’s borderline painful (learned that the hard way) to break them open with your fingers if they aren’t soaked.

Remove anything you’d rather not devour (the hard bit on the end of the white fungus, the inside of the lotus seeds).

Then, make some tea by adding tea leaves to hot water. Let it steep, then remove the tea leaves.

Add the white fungus, dates, ginger and lotus seeds to the tea, then let them cook until the lotus seeds are tender.

(Not sure how to use up the rest of your dates? Shameless plug for some red date longan tea, which also has cozy tòhng séui vibes).

Season to taste with brown sugar and salt, or you can start with the quantities I have listed if you’re not sure.

The last step of this soup is to add a bit of egg. Stir the soup gently, then pour in some beaten egg, and wispy bits of egg will form in your soup.

How quickly and vigorously you stir the soup will determine how broken up the egg gets. More aggressive whirlpool = smaller egg wisps, more careful movement = bigger egg wisps.

I prefer them to be on the bigger side, since they taste super soft and custardy that way, but either way is delicious!

The egg can end up kind of grey, so yes, this is a delicious not gorgeous kind of dessert.

Ladle the soup into bowls, plunk in some Chinese soup spoons and serve hot!

The soup is light and clean tasting, mostly sweet with a hint of bitter tea and a smidge of spicy ginger. The white fungus adds a bit of a crunch (the closest texture cousin I can think of is jellyfish, my faveee), and the lotus seeds are soft and tender.

Through my research, I saw a few variations of this soup that used whole eggs.

However, based off of my non-scientific study of a few Taiwanese and Cantonese friends and family members, no one has had it this way. And personally, I can’t really wrap my head around eating a whole egg in tòhng séui because it doesn’t sound like it would get flavored enough to make sense in a dessert.

One friend relayed from her mom that the whole egg is typically seen in fermented rice soup, especially for postpartum people. Beyond that, I wasn’t able to dig up more anecdotal evidence or info.

I tried using gingko nuts during one test of this recipe but they were a little too bitter for me, so I omitted them from all subsequent attempts (and the final written recipe). Don’t let me stop you from adding as much as you would like though!

I found some in the refrigerated section of a Chinese grocery store next to the kimchi of all places, and tried to ask for help in Cantonese before eventually giving up and showing the stocking employee a picture.

I like the fungus to be pretty crunchy. For anyone who like theirs on the softer side, you can cook it longer (hold off on adding the lotus seeds, since these take less time to cook)!

I didn’t want the tea to dominate this soup (I’d just make a cup of tea for myself instead then). Maybe you want it stronger though, and you can steep the tea longer or add more tea to achieve that.

Ideally you’d add more tea, since steeping the tea for too long can make it a little bitter.

I like using a black tea in this recipe, since it needs to be strong enough to stand up to the other ingredients and because it doesn’t get steeped for too long. Honestly, any other kind of tea (white, green, herbal, etc) would be delicious too, so long as you’re okay with the tea flavor being very subtle.

Instead of brown sugar, you could use honey or rock sugar or white sugar.

You could even add some dried fruit to the soup to sweeten and flavor it.

If the fruit is too big and/or hard to soften in the soup during the time it takes to cook, you should cut them up to make sure they’re soft enough when you eat them. And, their flavor will infuse more into the soup anyways.

Goji berries are my favorite, since they’re so sweet, small and seedless (no prep required), but dried loquat, longan or jujube could also work.

I am a sucker for tōng yùhn, whether they're unfilled like in this hùhng dau tōng or filled with black sesame and coconut. When my grandma taught me how to make it two Lunar New Years ago, I’m pretty sure I ate more than the rest of the family. Whoops.

The idea of adding a few sounds amazing, albeit not traditional.

Though this soup can be served cold, room temperature or warm, my personal preference is warm. And that opinion is only a little bit influenced by the fact that I’m typing this post up on the cusp of winter.

You can make this ahead of time, and store it in the fridge for up to a week. The flavors will meld over time, so if you can make this soup in advance, definitely do so!

You can alternatively freeze this soup for up a month, and then thaw or re-heat when you’re ready to break into your stash. 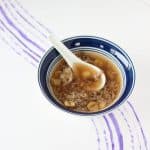 This soup can be made ahead of time and stored in the fridge for up to a week, or in the freezer for a few months.