these were inspired by the matterhorn macaroons at disneyland. i've never had one there (i always get seduced away from them by macarons or peanut butter cookies or ice cream or other delicacies), but it seemed like something perfect to make at home, and perfect to use as an introduction to my disney series.

fall quarter of sophomore year of college, i was craving disneyland something fierce. it was a caustic combo of having a high school friend stay in my apartment with a bunch of her friends and take them into disneyland for free without me (she works for a disney store at home, and can get herself + up to 3 others into most disney parks in the world for free a number of times per year), and being very bored at school. i even convinced some of my college friends to go with me to downtown disney on a tuesday night (what is studying) bc i wanted to go to disneyland so bad (this visit just made matters worse). and although i was dying to go to the laughing place, i couldn’t bring myself to drop $100+ after i had a taste of free disney (that friend i mentioned before has gotten me in previous times).

so what’s a disney deprived girl to do? make disney food, ofc. even if she isn't deprived at the moment (if you saw my anaheim trip post a month ago, you'll see that i was lucky enough to get to go again).

these macaroons have half sweetened and half unsweetened coconut. this gives you two options post-baking: you can either keep them plain (my preferred happy ending), or dip them in white chocolate and dust with powdered sugar a la jolly holiday bakery in disneyland. sure, you could dip them in chocolate and coat with more sugar anyways, but having some unsweetened coconut inside the macaroons helps cut down on all that sweetness. i straddled the line and added a sprinkling of powdered sugar to the ones photographed here, because my white chocolate refused to cooperate that day.

these macaroons (whether or not you make them into matterhorn macaroons) are dense and chewy in the middle, with a great crunch on the outside. they lose this texture after the first day, but if you toast them (gently! otherwise they get a little... toasty), you'll see that the loss was happily temporary. the flavor is solidly coconut (if you didn't expect that, i might need to ask you to re-evaluate this recipe), but there's also caramelly notes that come out when the sweetened condensed milk evolves into something closer to dulce de leche. they're the perfect way to celebrate everything you like about disney, or if you're like my anti-disney dad, it's just a delicious dessert. 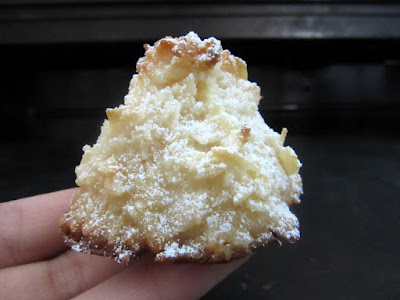