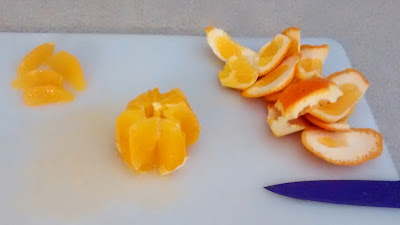 I was bored. So, I did what any other college freshman would do- I learned how to segment an orange. What, did you think I was going to say partying or drinking? Pssh.

I grabbed the least offensive looking one from the pile on ice (not sure why they’re on ice) from the dining hall, even though it was still puny looking. I took off the orange peel like I do with a watermelon: I stood it up, and then shaved down the outsides. But I took a bit of the flesh with it too, to make sure that none of the pith made its way onto the supremes. Then I made a cut alongside one membrane, pulled out, and then made another cut alongside the opposite membrane so that the cuts connected, and flopped out the segment. 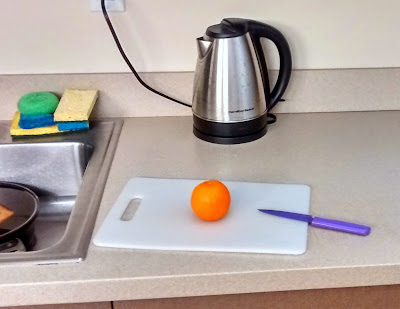 I happen to like my purple knife. I took it from my mom and brought it with me to school. Hehe.

I think you’re supposed to use a larger orange, because it got hard to hold and the segments were tinier than I thought they would be. I did four and then gave up, because I was making a mess and the orange was losing its shape (and becoming hard to cut). It seemed like a waste of an orange, since some of the flesh gets cut away, and a waste of the juice (you can see the faint tint of color to the left of the deformed orange). I did like the texture of the supreme; it was like a mandarin orange, but not as cutely shaped. I feel like these would be great in a Chinese chicken salad, since my mom doesn’t like the chemicals in canned mandarin oranges (but I know she wouldn’t want to go through the trouble of making supremes, so I would end up doing it).