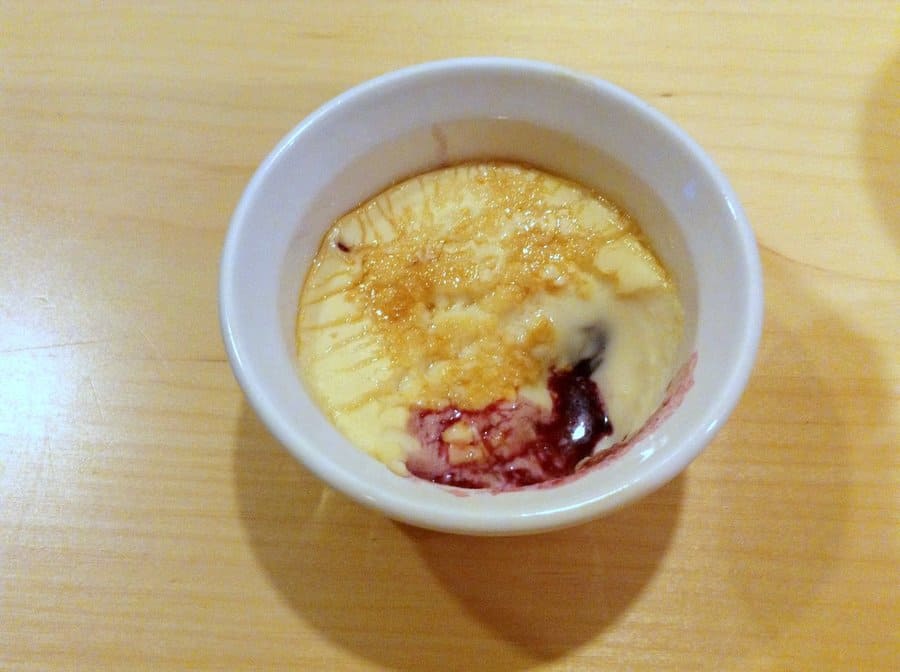 I have leftover low fat cream cheese from when I made cream cheese brownies a little while ago with Yang and Dough Girl. And I had some frozen berries that I could use. And I was really bored and hungry for dessert. So I whipped up a batch of these raspberry custard cups.

I love custard, but I hate how dish and time intensive making custard is. I always feel like I overcook it, at which point I need to strain the custard to get out the scrambled egg bits. Ugh.

I measured out the first stage of ingredients and went into the fridge… to realize that we only had chocolate milk. I contemplated using it for about thirty seconds, then yelled to Dad that I was going to Trader Joe’s (my happy place, besides Barnes and Nobles) for milk. I had 20 minutes, so I ran to the van and sped out. I almost hit a biker, but didn’t. Thank goodness. I also got some whole grain cereal there, because you never know when the munchies will hit.

I used 2% milk. I have to admit, I didn’t stir constantly, though I did end up paying for it a bit. The custard on the very bottom edges scrambled, though I was able to keep that in the saucepan. It started thickening way before the 5 minute mark; more like when the custard started boiling. The cream cheese wasn’t quite room temperature, but the heat of the custard made the coldness okay. I made sure to whisk each piece of cream cheese in until it was fully incorporated before adding the next one. The cool cheese helped chill the custard, and I didn’t have to refrigerate it for that long (maybe 30 minutes?).

I modified the recipe slightly. Instead of doing custard on the bottom and fruit on top, I reversed it. I don’t really want hot bruleed fruit, and want to veer more towards a creme brulee sort of top. I spooned defrosted berries into seven custard cups. I then spooned the custard on top, rather than poured, since it was so thick. I smoothed the surface with the back of a spoon before sprinkling on turbinado sugar. I used that instead of brown, since it’s easier to sprinkle.

I forgot to broil the custards sans sugar first, but I figured it’d be fine. The custard already tasted so good on its own that I wasn’t afraid. I broiled it for 2 minutes, just until the sugar was molten and bubbly. I should have let it go longer so that it could become crisp and shattering like a creme brulee crust, but I was afraid of burning them.

The final raspberry custard cups were delicious. The custard was creamy and smooth, with the slight tang of the cream cheese. It was a little too sweet, but cutting it down to 1/4 cup would help; I’m slightly apprehensive to suggest it, however, as I’m not sure how it would affect the texture. A more surefire way to combat the sweetness is to use tart berries. Raspberries or blackberries would work well, but I imagine strawberries would be too sweet. Broiling isn’t necessary in my opinion. True, I didn’t get the full effect, as my brulee wasn’t quite right, but I still think a cupful of custard with a bunch of really juicy, fresh berries would be just as lovely.

Raspberry Custard Cups
adapted from The Food52 Cookbook, Volume 2
Cheesecake and creme brulee, rolled into one.