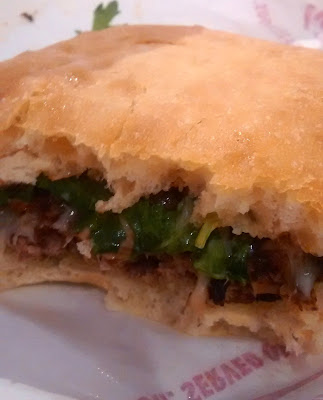 Smashburger with family friends after a quad of basketball games. I’ve been to Smashburger before, but just for their sweet potato fries and smashfries.

I had a Bay burger, with truffle mayo, arugula, Swiss and mushrooms. Dad insisted I get something with truffle mayo, and I can’t say I argued with his suggestion. It came on a square bun that looked interesting but got lost among everything else. I was sad that the bun wasn’t buttered and toasted; In n Out does that so well that it’s sad when its buns beat out something that is significantly more expensive and of higher quality. The truffle mayo was quite fabulous, and it was the best part of the burger. So yes, get something with that mayo. The Swiss was nice and melty and provided a good amount of ooze and fat (as if you need more with the mayo already there but I’m not complaining). The mushrooms were good, though I wish there were more and that they were cooked down / browned more. The arugula wasn’t as peppery as I wanted it to be, since there was cheese/mayo that it needed to cut through. The burger itself was unmemorable; it was too well for my tastes (and I do like my meat on the more well side). Overall I prefer In-n-Out, even though In-n-Out burgers aren’t as refined; well-cooked (not well-done but you know what I mean) meat and a toasty buttery squishy-but-kind-of-crisped bun define a burger, and this one just didn’t deliver.

The sweet potato fries tasted like a sweet potato should, and I liked that they weren’t that starchy. They had a really nice crisp, and ketchup was optional because they were so good plain. The smashfries were better than I remember, and the oil they used tasted particularly fruity. There wasn’t as much rosemary, but the truffle was more potent, which is a most certainly fine trade-off.

Would I go back? Probably not. If I want a fancier burger, I’ll go to Habit. If I want a lowkey burger, then In-n-Out all the way.