What Is Baked Sushi?

Sushi bake is rice topped with a creamy imitation crab salad, almost like a sushi casserole. It's eaten in spoonfuls wrapped in crispy seaweed. Since it's so rich, baked sushi is best served in small portions as an appetizer.

Here are the main ingredients in this sushi bake:

For recipes like Spam and egg musubi, you need fresh, hot rice, and sometimes you don't. This is one of the times when you can definitely use leftover rice, so long as you heat it up with some water and break up any big chunks before you layer the rice with the crab salad.

You can use fresh or dried mushrooms here. If you're using dried, make sure to soak the mushrooms until the caps and stems are thoroughly softened. I like to cover my mushrooms in hot water, weigh them down with another bowl and let them soak overnight, so that when it comes time to use the mushrooms I'm not waiting around for them to do their thing.

I'm sure there's at least one person wondering if you can omit the mushrooms. You definitely can, though they add a little chewiness that you otherwise don't get, and they add a lot of flavor.

I didn't use tobiko or masago in the batch pictured here, and the majority of my relatives do not either when they make this recipe. If you'd like to ball out (and you can find some at a Japanese grocery store), go for it. They add a little juiciness and a fun pop (the texture is similar to less liquidy popping boba).

Sour cream and mayonnaise make this really creamy, and help bind the salad together. You could use cream cheese instead of sour cream, and I've seen other recipes do so. I personally think sour cream is easier to use, since you don't have to let it come to room temperature and whip until homogeneous like you would with cream cheese.

There's a little hot sauce used for flavor, rather than heat. I'm the last person who can handle any sort of spice (I'm sniffling and snotty after eating anything with more than a speck of hot sauce, and I refuse to use orange sauce when I'm at La Vic's), but I refuse to make this without any sort of hot sauce.

I recommend going with an Asian hot sauce (think sambal, chili garlic sauce, Sriracha), though anything that isn't too tangy would work.

No. There's sour cream and mayo, in addition to plenty of salty imitation crab and rice, so I wouldn't equate the calorie count or nutrition profile of some sushi bake with a salad. You could make some swaps here to make the sushi bake a little healthier, since you're not baking or hoping for a chemical reaction (though I would also make the argument that you should go for it instead of creating some half-satisfying facsimile):

How Do You Eat Sushi Bake?

Have some seaweed at the ready. I like using Korean seaweed here, since it's sold pre-cut in 3x4" sizes (I usually buy individual packs that weigh less than an ounce and admittedly have an overabundance of packaging) that are prefect for a spoonful of sushi bake. It's also seasoned with extra salt and some sesame oil, so it's tastier than the plain seaweed you'd normally use for kimbap or sushi.

Once you have your seaweed on standby, you can put a hot pad down on the table and place the sushi bake on top. People can serve themselves and scoop the sushi bake into the seaweed.

If it's not a party (ie when I made the batch here for the blog, and also during a pandemic when you should not be sharing a big pan of food with others ahem), I eat the sushi bake in a bowl with crumbled seaweed on top. Sometimes you don't want to get your fingers dirty, ya know? 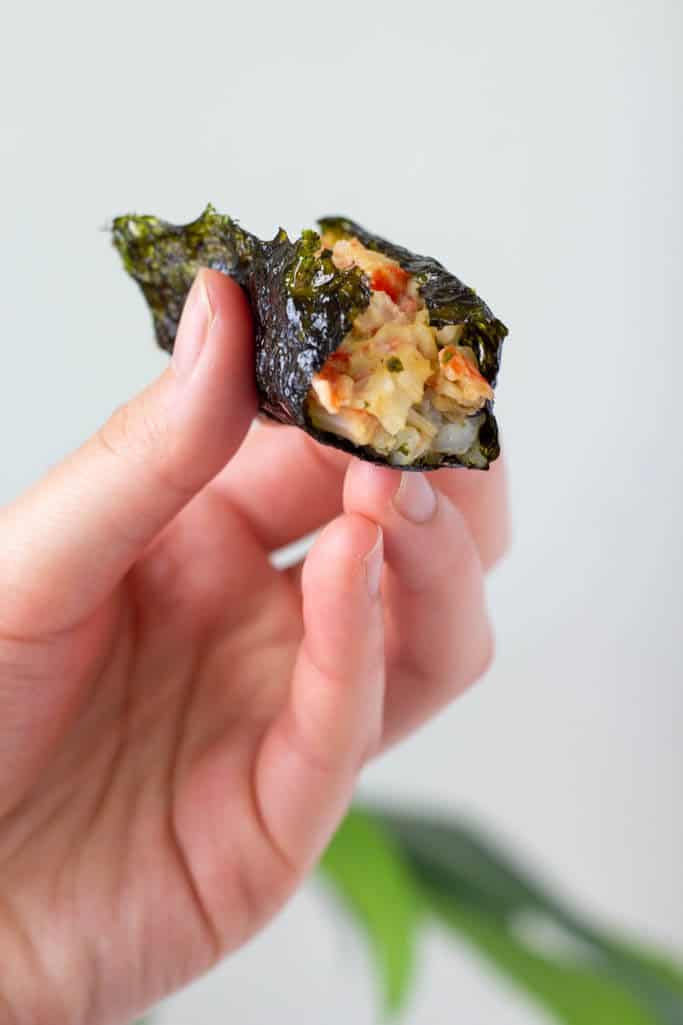