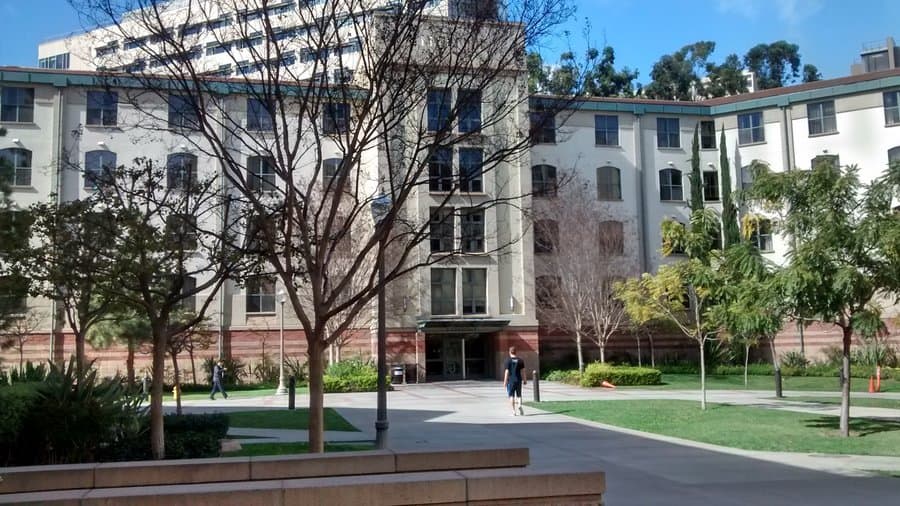 After going to LA for Pentatonix and 5 Seconds of Summer, I vowed not to do anymore crazy LA trips. I lasted less than 14 weeks later. I knew Will Jay, an ex-boy band member gone solo, was performing in LA, but I didn’t care that much, and I was trying to uphold my no LA adventures policy. But then he released a new song, and I was talking to Orange and Bun of Secrets about him. Next thing I know, I’m buying tickets to see him two days beforehand, trying to figure out if anyone wants to go with me, and seeing what’s the cheapest/safest/fastest way to get there.

Before the concert, I got to meet up with Hermione and hang out with her. We went to Red Tiger, the first non-crowed place we saw, because she really wanted noodles (ain’t gonna complain, because carbs are great). 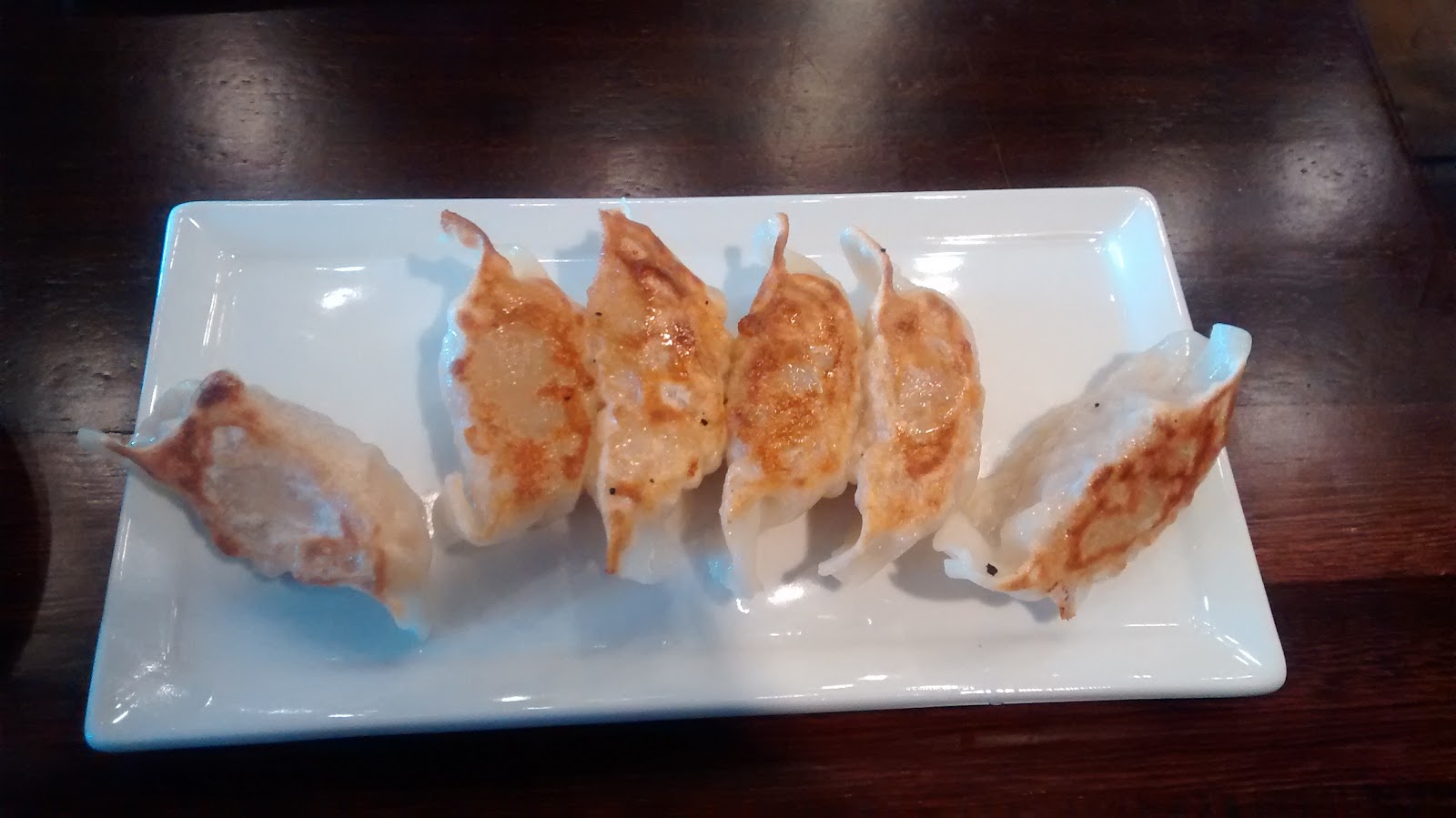 It was somewhat expensive. We had 6 shrimp dumplings for $7.50, and I can wholeheartedly say that I’ve had siu mai from dumpy dim sum places that are tastier. The shrimp tasted sweet and the ginger was nice, as well as the browning on the bottom of the potstickers. The texture, however, was really mushy, like they pureed the heck out of the shrimp. 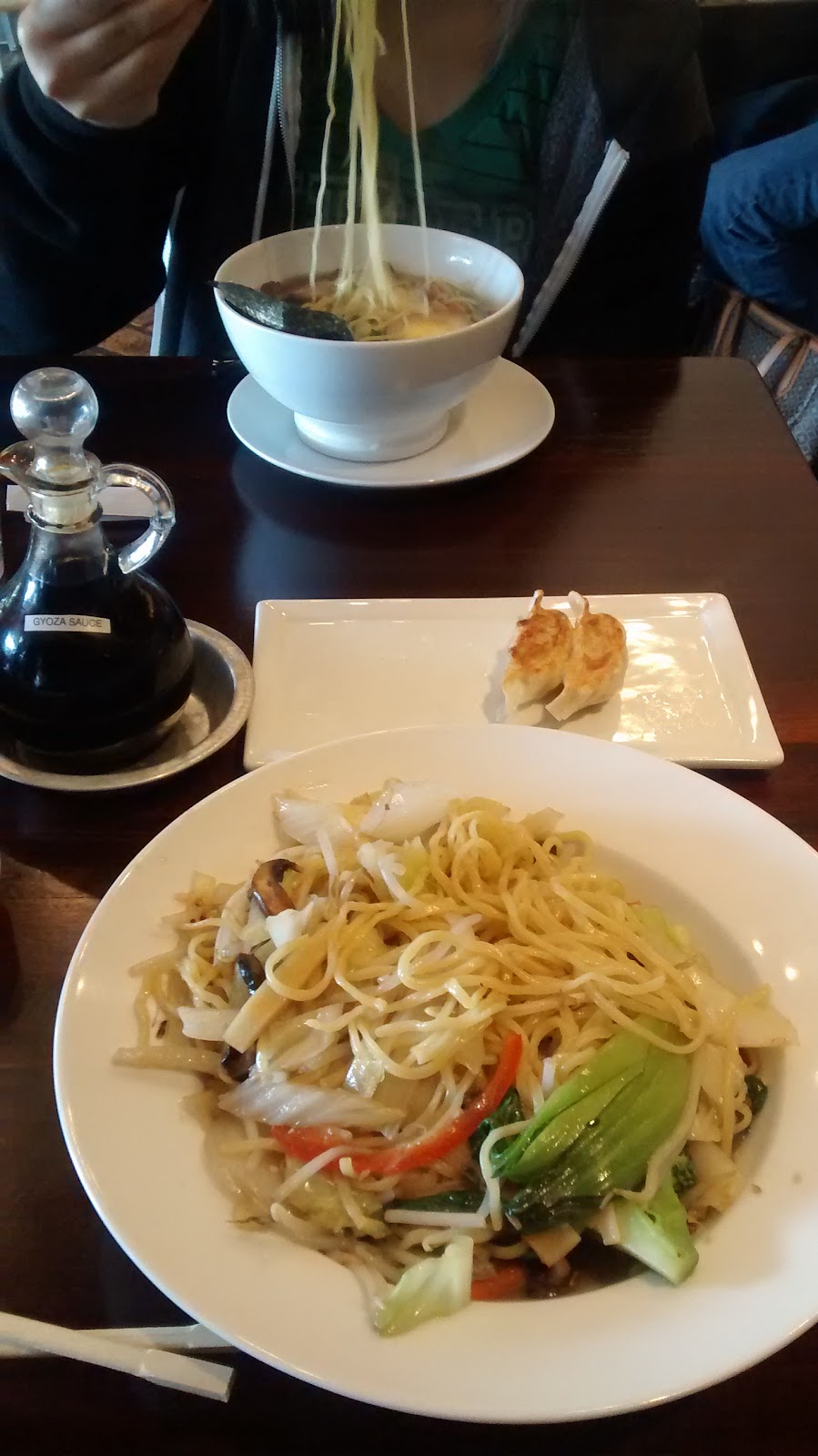 I had vegetable pan-fried noodles, which were $9. I read pan-fried as crunchy, and I was dreaming of chow fun with a really deep brown sauce and chewy/crunchy noodles. And then it arrived, paler than my Bostonian friend’s skin. The noodles were cooked well, and had a good chew to them. The veggies were cooked fine, but I wished there were more of them. The bok choy and broccoli were cut really big, like Chinese restaurant big; this make them unwieldy, especially with chopsticks. On the other hand, the mushrooms were shrunken and microscopic, the only reason I was able to spot them being the contrast between their darkness and the pale noodles. It was a pretty big portion, but I didn’t feel like it merited $9 of yumminess. It was kind of bland, so I added soy sauce, which helped. I couldn’t help but think some garlic/ginger/fish sauce would really help. I’m bashing on veggie noodles, which doesn’t seem right; I got what I deserved for ordering veggie noodles. But why have something that isn’t great on the menu?

And then she showed me her dorm room. She lives in one of the really nice ones that just got remodeled. It looks like a hotel room, there’s built-in closets, a private bathroom, and there’s actually space to walk around even though it’s a triple. I’m still awestruck when I think about it. She gave me a mini tour of UCLA before I left for the concert.

All those college touring feelings came back. The overwhelming bigness, a bit of stress for having to decide where to go for the next four years instead of school district lines telling you, some wonder/awe for such a pretty place. It’s a really pretty mix of modern and traditional, and I’m glad I didn’t visit it before I started college. Otherwise, I might have been tempted to apply which wouldn’t have turned out well because 1) they don’t have my major and I’m not sure what I would do there, and 2) I would have been sad after being rejected (it’s too hardcore for me).

I left her with a hug and a demand that we hang out over spring break before heading over to The Mint. I got there maybe 5 minutes before the concert started, but I was still able to find a squishy space 5 feet from the stage. Ahh, I love small venues like this.

There was an opening band, which annoyed me a touch because I thought it was just going to be an onslaught of Will Jay. They had 15 minutes of airtime before he came in; while it lasted, it was great. He’s really charismatic, and he seemed to be loving it up there. Dalton (the first IM5 member to leave) had a surprise visit, and he did a song with Will. Apparently David (the other former IM5 member) was in the crowd, too. Anyways, his set was no longer than 30 minutes; this disappointed me, but what can you do? There was a meet and greet afterwards, and I tried to get him to do the “rip em eaters” sign but it didn’t quite work. Oh, well. He gave me a hug and thanked me for coming, and that it meant a lot to him. Original? Nope. It didn’t matter, because he was so genuine about that I knew he was serious. 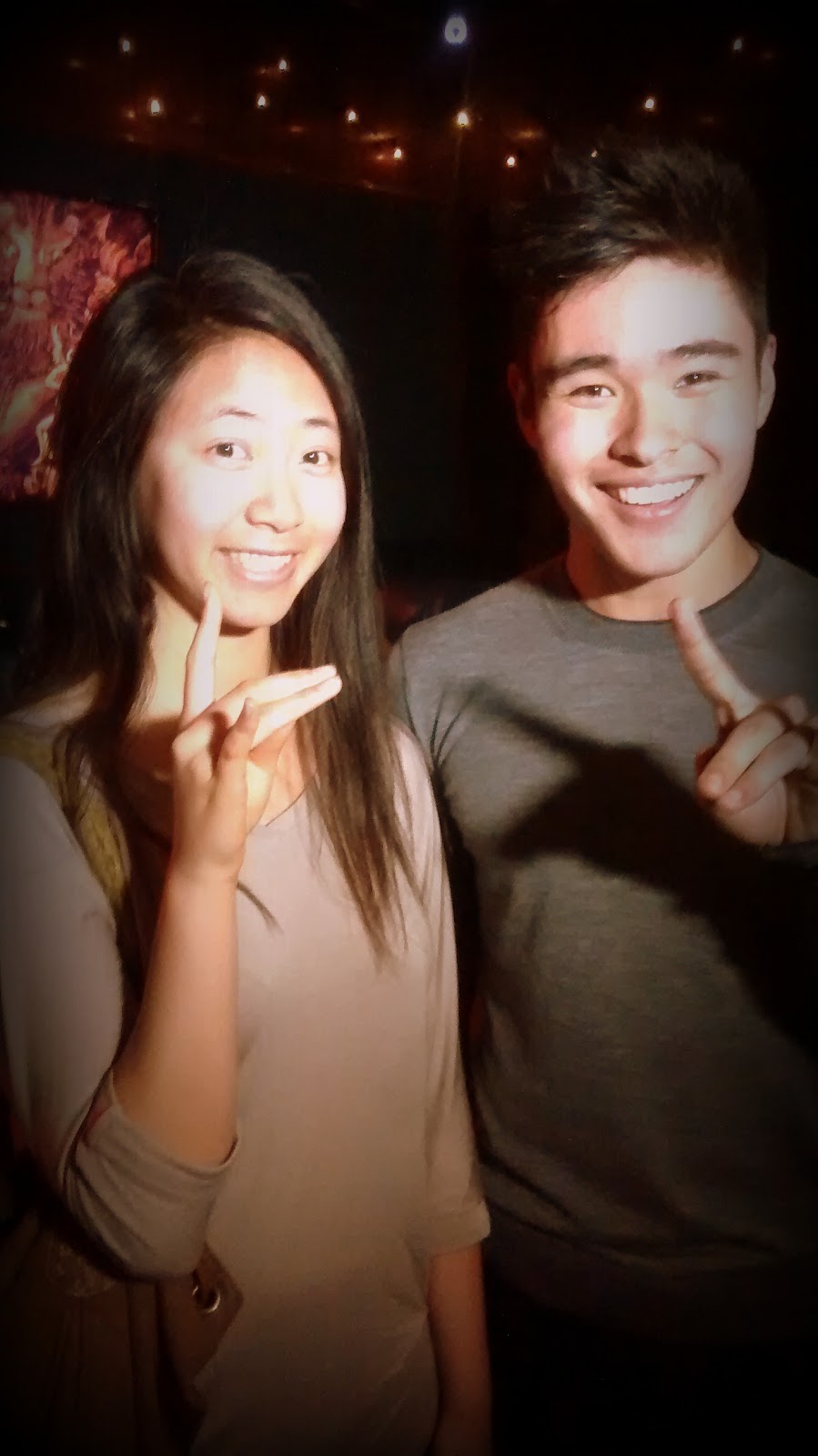 I had wanted to stop by Copenhagen Pastry before going back to school, but it closes at 4pm on Saturdays, so that wasn’t going to work. I couldn’t squander the opportunity to try out a bakery while I was there, so a 10 minute detour north to Fonuts in Beverly Grove was necessary. They have fake donuts- they’re donut-shaped but baked or steamed instead of fried.

At 4:30pm on a Saturday, there was the following kinds left: one regular, three vegan/gluten free and three gluten free left. I had to get two (I was all the way over there! And it seems mean to judge a place based on one thing). I got the regular (blueberry earl grey) and the chocolate hazelnut gf (that’s the one the worker recommended of the gf), each $3.50. I was too afraid to try the v/gf but just gf sounded fine (almond flour sounded yummy in it). The v/gf flavors sounded good (coconut chocolate, coconut passion fruit) but vegan was too much for me. 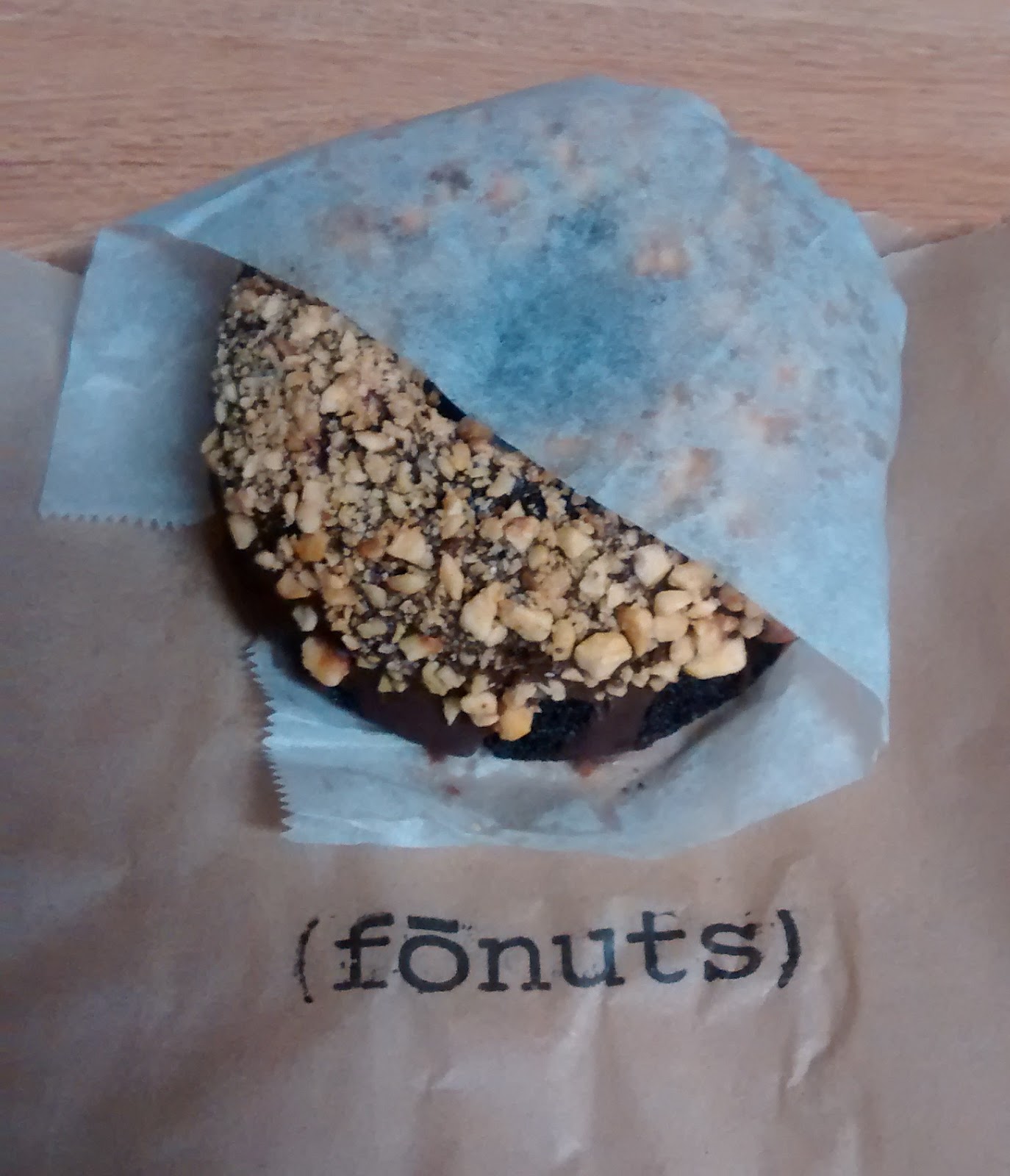 They came along on the ride back to school. They sat in their paper bags for maybe two hours, but the grease and glaze soaked through, so I’d suggest eating them ASAP.

The first I tried was the chocolate hazelnut. Get the gluten free out of the way, was my reasoning. It was super deep chocolatey looking like a good chocolate cake, and I was sad to find myself wishing it tasted more chocolatey. It really moist but the texture was more crumbly than cohesive (no gluten!! my bio of food class knowledge is coming through here). The chocolate glaze kind of got lost; it was not chocolatey, only sweet. I loved the crunch of the hazelnuts on top, and they were so nutty and tasty. I wished it was more cohesive flavor-wise, since it tasted like a chocolate donut with hazelnuts on top instead of a chocolate and hazelnut doughnut. 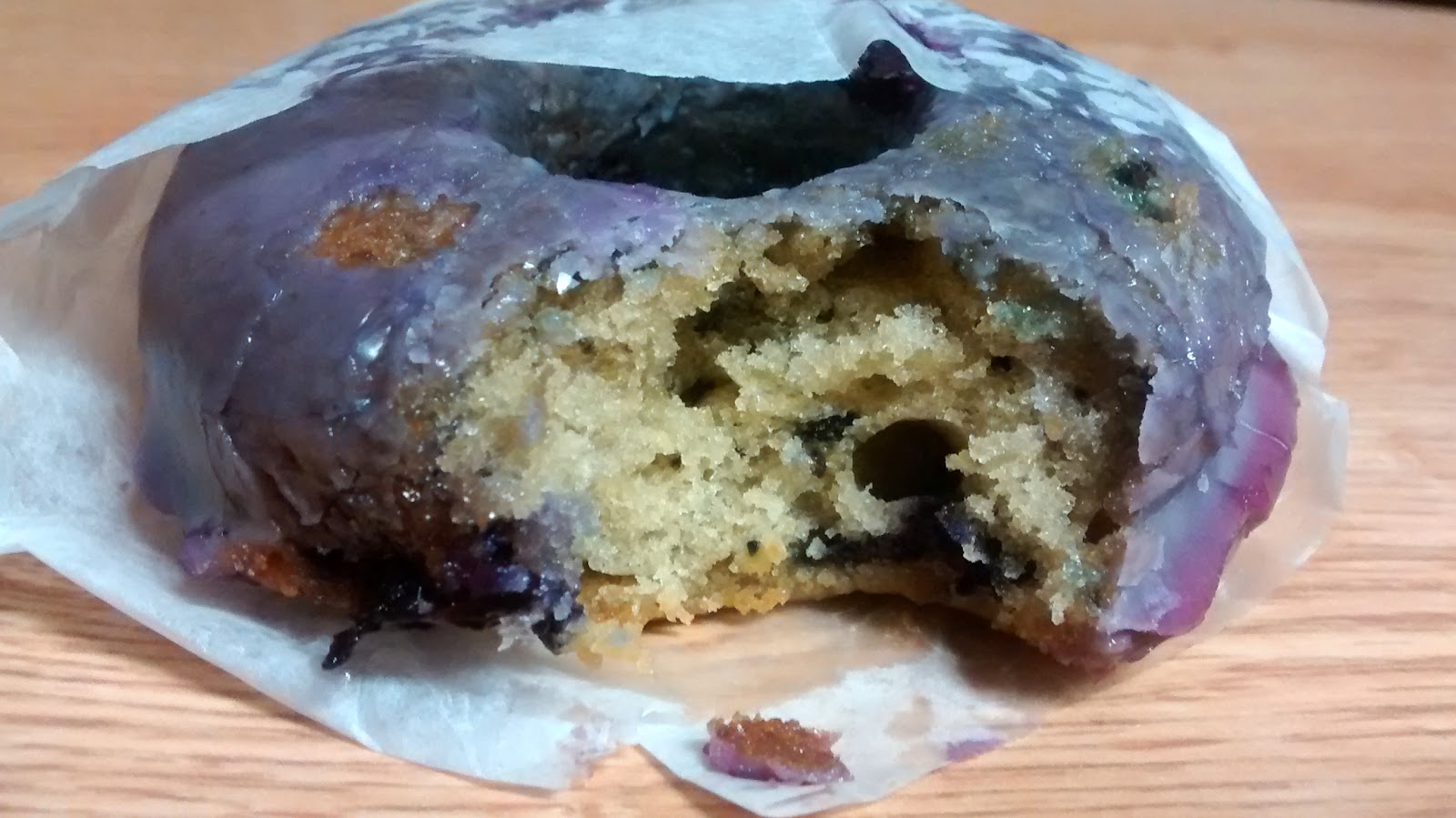 I was going to be good and save the blueberry earl grey for the next day. But then I got curious and hangry. I was going to peek at it, maybe take a bite, and that’s it. But it was all greasy and the glaze was torn off in patches and left on the wrapper. So I said screw it, and ate it all. The pictures sucked because the donut was fugly (heh, see what I did there) and because my dorm light and desk are not the most conducive to flattering pictures. I found the texture to be cakey and more like a muffin, which I liked despite it not being evocative of a doughnut. The berries were chewy, and that was a bit weird. I couldn’t taste the earl grey sadly; I prefer strong tea though, so maybe it just wasn’t enough for me. I think orange zest or oil would have pumped up the orange/earl grey more.

It was a fun adventure in LA, but it was pretty expensive. And getting there/back was a pain in the butt. Anna Akana and Jordan Rodrigues are in LA this week and though it’s tempting to catch them, I’ll abstain. For now.