it's always a good time for panzanella. i've only had it during the summer, when there's plenty of juicy, unbelievable sweet heirloom tomatoes snagged during the last 10 minutes of the farmers' market for only a couple of bucks. cubed tomato, torn fresh mozzarella, ribbons of basil, garlic croutons, extra virgin olive oil, balsamic vinegar, and you have dinner. but it's winter, and the tomatoes are long gone from the farmers' market, the supermarket ones pale and mealy. winter panzanella with roasted vegetables, anybody?

the beets make everything red, making it seem like you spent 2+ hours of work on a salad (this much time and energy and it's not even a gorgeous dessert and there's vegetables involved??) and all you got was a bowl of vegetables that look like they spent the day with a serial murderer.

but this winter panzanella is so tasty, i swear it's worth it. it's sweet, though in different ways- the beets bring a candied sweetness, the squash a gentle vegetal sweetness, the orange supremes a sweet/tart/citrusy sweetness and the fennel a caramelized onion-esque sweetness. these flavors get balanced by earthy mushrooms, tangy pickled carrots, garlicky croutons. and all that gets smoothed over, gentled, by the creaminess of fresh mozzarella (and/or avocado, but i didn't add that to my bowl). and in case you're a texture person, have no fear- the roasted vegetables are tender but not baked into submission, the carrots still have raw crunch, and the croutons are soft and nowhere near mushy (i'd be the first person to leave if they were). 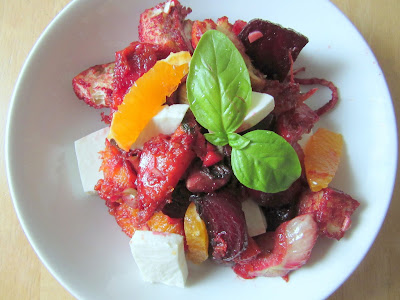 Winter Panzanella with Roasted Vegetables
inspired by My New Roots

I like to add the mozzarella at the end, because I find that it's not as creamy and silky when it sits in the dressing. The avocado is also best added last minute so that it doesn't get broken up into the salad (or you can add it earlier and have it coat everything else a bit).