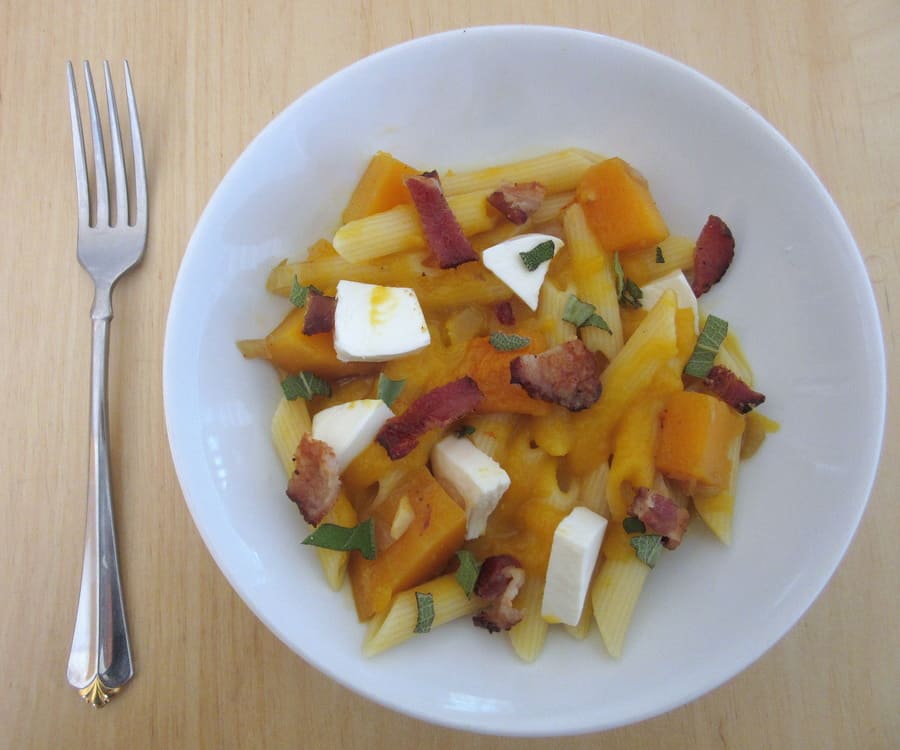 how’s your week going? i had a couple of friends stay with me this weekend, and they brought along another friend, who had previously refused to go and had been lying to me for a good month about it. but i completely approve of those kinds of lies. we went all over la for a day, and then went to disneyland the next. check out my instagram if you want to see part of the adventures! i’m still having trouble getting back to reality, but maybe this squash carbonara pasta (it’s like the bacon mac and cheese i had, but a little healthier because i need to detox from everything i ate last weekend) will help.

this happened for sunday lunch when i went home for a random weekend a couple weeks ago. i ate lots of food (can you sense a theme with my travels?). i went out for mango sago (mango nectar, mango chunks and tapioca), apple coffee cake, burritos, and thai food, and then made cinnamon rolls, orange olive oil almond muffins and this pasta at home. whew. it was a whirlwind 3 days, and it was good to go back to school just so my eating habits could stabilize and such. home is a dangerous place.

anyways, making squash carbonara was my sunday destiny: i had to rescue a neglected butternut squash (my mom ignored it and instead went on a surprising granola bar making bender, surprising because she’s been talking about making granola bars for 3+ years and finally did it), and there was sage in the fridge (which is never in the house, ever).

i was questioning if it was actually destiny, considering all that time and energy that went into this. i spent a good 1.5 hours (looking back at the recipe, not sure how i took this long oops) on it, thank goodness i love cooking/baking. but then i tasted it, and all was right in my little bubble of weekend at home bliss. the sauce alone was a little too similar to baby food, but tossed with the pasta it became creamy and the squash got toned down to the perfect level of vegetal. the mozzarella added another layer of creamy (just in case you want some real dairy involved in your “carbonara”), and the sage added a hint of herbaciousness. the bacon was the key though- it added salt, crunch and overall deliciousness. though that’s not surprising.

Squash Carbonara with Pancetta and Sage
from Alison Roman via Bon Appetit, February 2014

2 Replies to “Squash Carbonara with Pancetta and Sage”