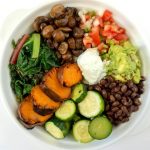 If you can, I'd recommend charring the sweet potatoes right before serving; otherwise, the skin loses its crispness if you let it sit too long. Still tasty when the potato skin isn't crispy, though!

Feel free to cut down on the variety of vegetables used, or use storebought salsa/pico de gallo and guacamole if you're running low on time and energy. You can also add cheese, tortilla chips, or whatever else you'd like to this bowl!