i'm jumping on the zucchini pasta train extremely late. i was convinced that they were not a replacement for pasta whatsoever, and scorned them endlessly. maybe it was time, or maybe it was doing social media for a zoodle/cauliflower rice company for 5 months and being surrounded with the stuff, or constantly seeing them on other blogs, but i became curious enough to try them.

and you know what? they're kind of amazing. granted, i love zucchini already and i never tried them with the expectation that they would be wheaty pasta's bffl, but dang. try them, now. no spiralizer or mandoline necessary, just a vegetable peeler and a bit of time. they're perfect for this summery pesto eggplant zucchini pasta.

traditional pesto uses pignolias (which sound like pig magnolias), aka pine nuts, but i like almonds better. they're cheaper (which also means you can sprinkle almonds on top as freely as a flowergirl with a basket of petals), and they don't have that bitter taste.

the resulting pesto eggplant zucchini pasta is a revelation for summer, fresh and perfect served cool/room temp for those scorching days. the pesto is even more bright and zingy than usual with lemon zest and juice. the creamy mozzarella smooths out any rough edges of the admittedly intense pesto. the eggplant gets a touch smoky and charred, even in a nonstick pan. and let's not forget the unlikely hero, the zucchini. when shaved and then gently cooked until just tender, it becomes silky. not at all like pasta, which makes it easier to swallow, but it still goes down well on its own merit. 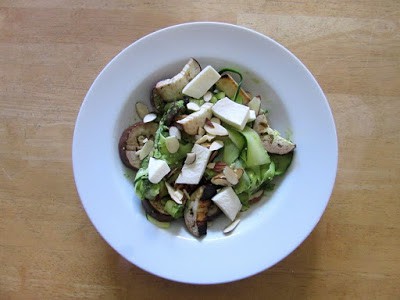 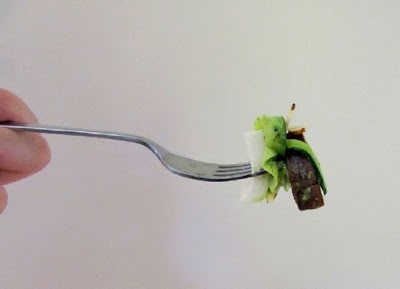