if you have leftover baba ghanoush and are tired of eating it with pita and crudites and on toast and pizza and everything you can think of, or if you want a little bit more veggie power packed in (did you know eggplant doesn’t have much nutritional value? thanks for nothing, eggplant), then hi. hello. wassup. this roasted broccoli salad transforms the aforementioned baba ghanoush with roasted broccoli tossed in a tangy vinaigrette, and the whole shebang gets sprinkled with cilantro and toasted nuts. if that doesn’t scream LOOK AT ME I'M HEALTHY, then idk what does.

you get the silky eggplant but also crisp-tender broccoli. the almost richness from the bit of tahini in the baba ghanoush, balanced with the acidity of the dressing, which also has a bit of cumin (which i think of as a spice with a lemony but also kind of reminiscent of indian food flavor). there’s the crunch of the almonds, and fresh herbaceousness from the cilantro.

force feed your fam if you must, but make them eat the roasted broccoli salad with baba ghanoush all together. the separate parts are good but not great, but when you combine them, you will convert (most of; my picky “i subsist on granola bars and chicken nuggets and cheddar” brother is not convinced) the haters. 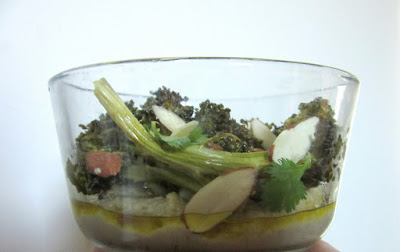