hello there. it feels like it's been a while since i've been around in the blogosphere, as i haven't touched this space in a few weeks.

i was off wandering in countries 8-9 hrs ahead of my normal time zone, eating all the things and trying to not be that much of a trashy american tourist. and this coconut rice bowl with cumin broccoli slaw and quick pickles feels appropriate- i've been craving asian food something fierce (which may or may not have led to my particular appreciation for dishoom, or maybe it's a great restaurant period).

the name for this one was hard. calling it an asian mediterranean bowl sounds weird and also kind of vague.

there’s a bunch of little things that would make the title impossible to remember or use if i referenced all of them, and i was also kind of drawn to calling it the, “i like lots of mini salads” bowl, but couldn’t get behind that either.

the original inspiration was the (too) plainly named “veggie bowl” from laughing planet cafe, which i’m not sure how i stumbled across because none of their locations are in california. most of them are in oregon, which I've spent a collective three days in throughout my life, including that time i was stuck in sloppy, muddy astoria during a cruise stop. and tbh, i ended up drifting a good distance away from their veggie bowl anyways, at least by listing of the components.

now that i've rambled enough about how this coconut rice bowl with cumin broccoli slaw came about, let me ramble further.

the rice is a little creamy and a little coconut-y, making it almost decadent. there's so much crunchy veg that you won't get bored even as you're nearing the last bite of the bowl.

there are sweet/sour quick pickles, savory/lemon-y/cumin-y broccoli that's so addictive i could eat it straight even though i am normally staunchly anti-raw broccoli, and a sesame-y/lime-y cabbage slaw. GIVE ME ALL THE SALAD.

(and if you're not in the mood for a lemon and cumin broccoli salad, how about using a bit of this broccoli gribiche on top of the bowl instead?).

the tofu is crispy on the outside and creamy on the inside, and did i mention that serving this with a generous amount of chili garlic sauce is a fantastic idea? happy lunching. 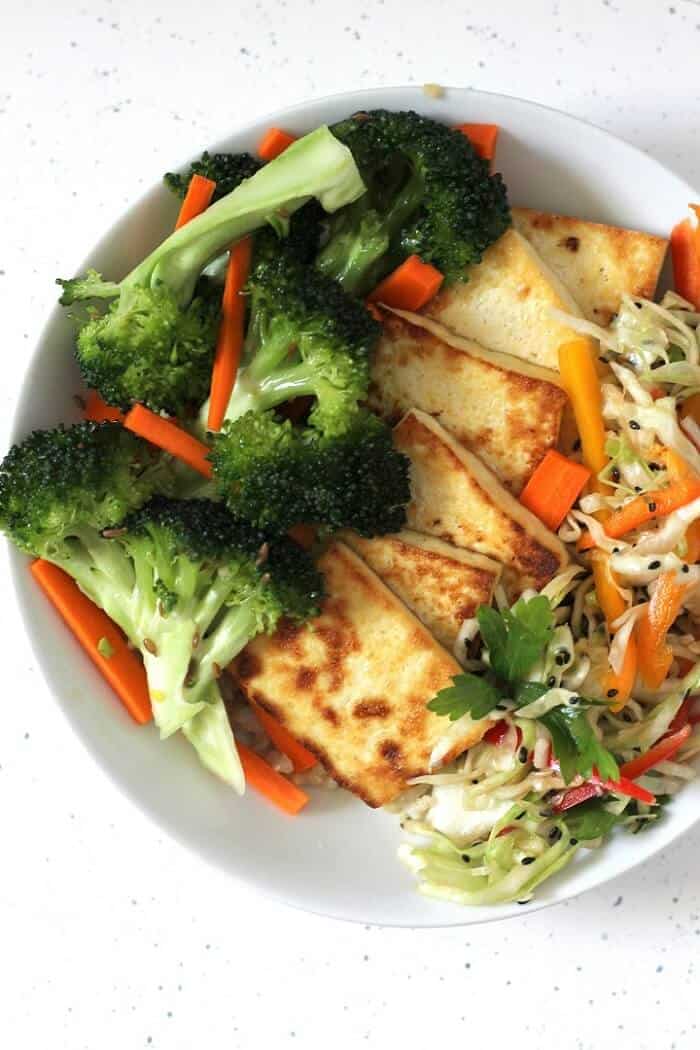 This recipe is a bit of a beast in terms of how many components there are, but they're more time intensive than hard. You can make some things in advance, or scale back on how many vegetable sides you'd like.

You can omit the fish sauce in the cilantro-lime cabbage slaw if you want to keep this vegan. You may need to add more soy sauce or salt.

if you're into meal prepping (props to you!!), then maybe these spicy pan-fried tofu rice bowls and beef rice bowls with sesame cabbage slaw are up next after the coconut rice bowls. 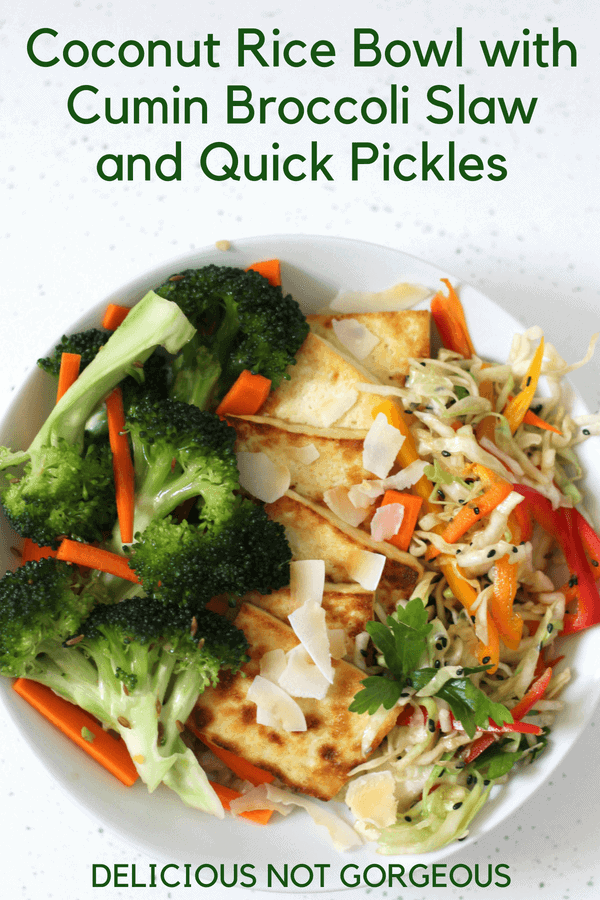