i don't know how many lectures i’ve gone to. i’ve gone to ones on south east asian religion, ones on databases, ones that aren’t really lectures at all (i had a business class where our main task was to take bs quizzes featuring questions like, what’s the name of a bosnian croat convicted of war crimes who died after drinking poison in front of a united nations tribunal in the hague?). but the biggest lesson i learned in college? it’s not what you do, it’s who you do it with.

sure, there are some unredeemable activities (i’m not sure if i’d love backpacking, even if i was with the best people ever). but i wasn’t in a diy art club because i’m artsy, nor was i on the executive board of an information technology club for two years because i’m a technical person. it’s the people who made my time worthwhile. the people who i want to get trashy diner food in the middle of the night with, the people i want to sing jesse mccartney and brittney spears songs with, the people i chat at 2am while writing this blog post bc i don't sleep enough. i'm going to be spending less time with some of these people in the very near future though: i'm bidding adieu to my presidency this week. so long, farewell, i'll even say goodbye. 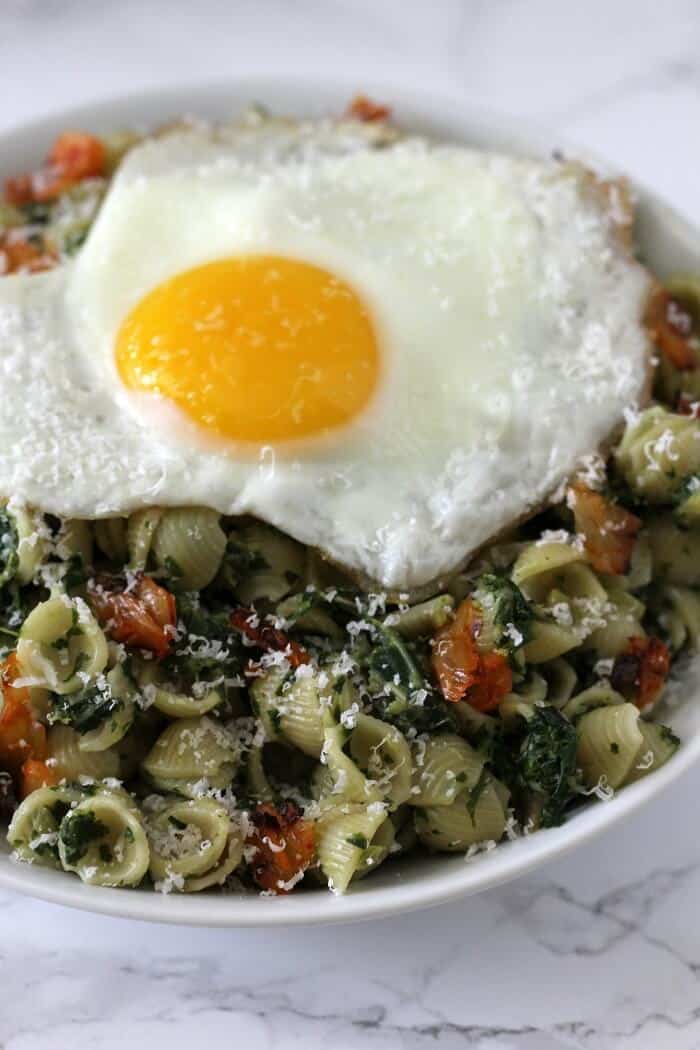 and because i apparently only know how to celebrate anniversaries and changes in my life with carbs, voila creamed kale and kimchi pasta. it was inspired by this number from food52, and i thought i got the idea of adding kimchi from the comments.

however, kimchi is nowhere to be referenced on the page, no matter how many times one might ctrl + f that query. the idea of adding kimchi probably came from the part of my brain that continuously craves korean food.

the kimchi stands out here as the star, but this creamy, cheesey (do you see that showering of parm?) pasta is also a good way to gentle a wary eater into this spicy, aggressive condiment.

fried eggs on top are optional, though i do recommend some sort of protein to make this more of an entree instead of a pasta course.

want more pasta? how about some spaghetti squash lasagna with scallion gremolata, or a weeknight cauliflower pasta with pecans and feta?

If you find that your kimchi is a bit too pungent raw, feel free to saute it to tame it. Add it to the pan with the onion, fennel and garlic, before you add the kale.