i got rear-ended last summer. i was leaving my internship early because i clocked in earlier than usual, and was excited to get home before 5:30pm. alas, it was not to be. luckily no one was hurt, my car was functional albeit with an exhaust pipe ready to detach at any moment, there was plenty of shoulder to pull over onto, and i had my insurance and phone.

the insurance and phone were crucial. you might think the phone was for taking pictures of damage and storing the other person's license plate number, and it was. it was also for calling my dad and asking him what to do in a semi-calm, oh my god i got rear-ended but at least i’m not crying (yet) voice. i do not recommend actually crying post-call though, since stinging, blurry eyes may make you feel like you will end up rear-ending another unlucky person.

anyways, i was in need of some comforting after that. and i need cake now as much as i did then, maybe even more so. there's supposed to be a new mooselamb ban soon, which (among many, many other things) is crazy. the friend i talk to most at school, the one who i see for 13+ hours/week, is muslim, and the only danger she presents is ruining the curve in my impossible finance class. i could continue to rant, and i probably will in person to others who share these sentiments, but i'll let you finally get to the banana cake with banana nutella swirl buttercream. bc cake (and self-care) are necessary.

this banana cake with banana nutella swirl buttercream features a banana cake from the queen (tbh there’s many queens: elizabeth, tori kelly, bey girl, shakira, cleopatra, etc but in this case i’m talking about ina garten), as well as swiss meringue buttercream flavored with freeze-dried bananas and a swirl of nutella. and there’s a surprise inside to represent all of life’s mysteries. hah no, i just thought that this cake needed some textural difference, and my family had been pounding the chocolate-covered almonds. i made my own chocolate-covered almonds because they were all gone when i thought to use them, but go ahead and buy some (we like the dark chocolate ones from trader joe’s that have a red label). or you could make chocolate-covered hazelnuts, even if i personally still feel like skinning hazelnuts is a chore.

there’s something for everyone in this banana cake with banana nutella swirl buttercream: moist banana cake, the surprise crispy crunchy chocolate-covered almonds in the middle, creamy banana buttercream and a bit of nutella. this splatter / drizzle on the outside of the cake happened because life is messy (read: i didn’t know how else to decorate it).

if you want more chocolate and banana goodness (who doesn't?) then this chocolate babka french toast with banana creme anglaise is also chef's kisses.

Shortcut mode: Omit the freeze-dried bananas in the buttercream, use storebought chocolate almonds (chopped up finely), and use a quicker cake decorating method. 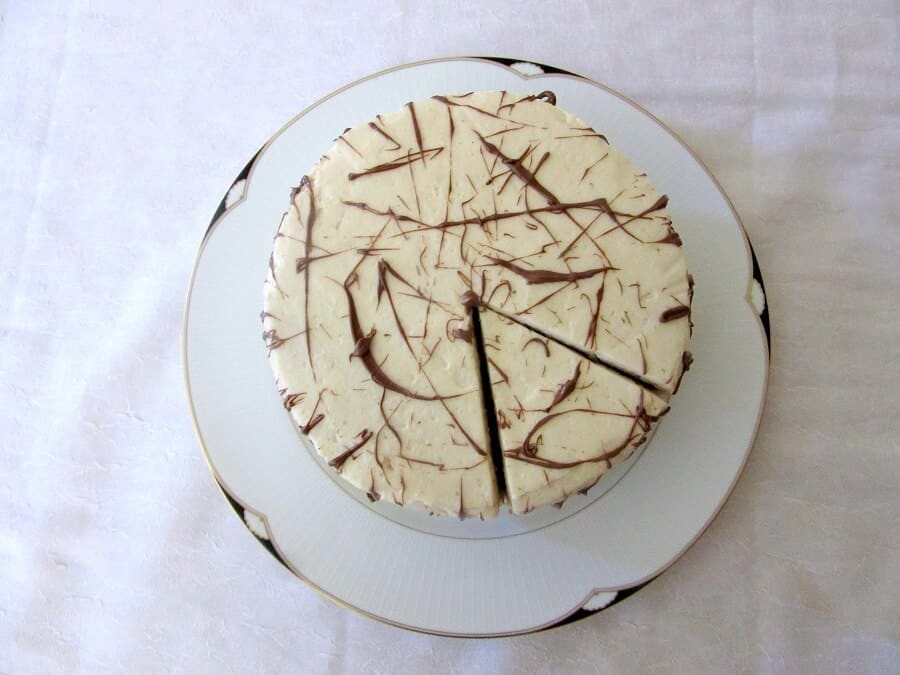