davis sounds considerably less sexy than napa or san francisco or los angeles. unless you’re familiar with the uc system or live in california, you’ve probably never heard of it. and yet, on a recent trip there (i find myself there a couple times a year to visit my friend), i got inspiration for these rosemary no churn ice cream pops. the rosemary and salted almond ice cream from the good scoop was gently rosemary-y without being like roasted chicken level rosemary, with crunch from the almonds. definitely a sweet ice cream still, but with a little extra oomph.

aside from it being peak ice cream season (it was 103f in the bay area last weekend...), it's also popsicle week!! billy from wit and vinegar has his annual popsicle week going on, so ofc i'm crashing the party with a melty batch of these. if you don't freeze them until they are rock solid frozen, or if you spend too long taking pics of them in the hot summer heat, they will be uber melty.

this ice cream is on the sweet and creamy side of things, kind of plain, and then BAM (channeling my inner emeril here), rosemary. plenty of dark chocolate, because that's how you convince rosemary-weary ice cream goers, ie my mom, to give this a try. and because this ice cream tends towards the sweeter side, so white/milk/semisweet would be too sweet here. almonds for crunch and salt. it's a slightly bougie, slightly unusual flavor, perfect for summer. 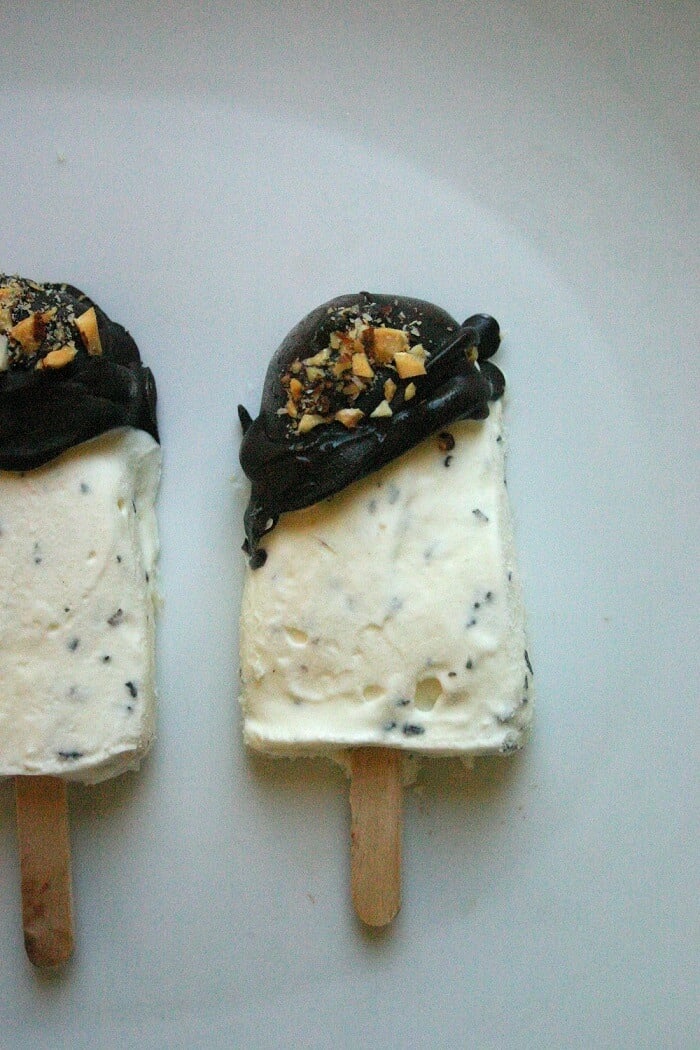 These rosemary no churn ice cream pops are filled with flecks of rosemary, so you know exactly what you're biting into.

The amount of rosemary is to taste, but keep in mind that the rosemary flavor tends to intensify as the ice cream freezes, and the base may taste weaker than the final ice cream. If you don't want to bite into rosemary, you could let the rosemary steep in the cream overnight in the fridge, then strain it out. I like to keep the rosemary in the ice cream for the pop of green.