This recipe has 7 ingredients: heavy cream, whole milk, black sesame seeds, sugar, salt, egg yolks and vodka. They all play a part in making the best ice cream, but let’s focus on the sesame seeds and the vodka.

You can typically find black sesame seeds at a local grocery store. I’ve had good luck at the Chinese, Korean, Japanese and Filipino shops in my area.

You might be able to find them at a westernized grocery store (especially in the bulk food section). If you can’t, it’s worth poking around online to weigh out the idea of getting some shipped to you.

For anyone who has already perused this recipe (and isn’t familiar with the hojicha ice cream or Yakult ice cream recipes on this site), you might be a little surprised as the presence of an unlikely friend: vodka.

Vodka (or any other high proof alcohol) has a low freezing point, aka it needs a relatively cold temperature before it freezes, which helps drop the freezing point of the ice cream as well.

In other words, the ice cream doesn’t freeze as solid with the addition of a bit of liquor, guaranteeing a creamy ice cream that isn’t as likely to form ice crystals.

You might be thinking, well commercial ice cream at an ice cream shop or from the freezer section at the grocery doesn’t need alcohol to be creamy, why does this one?

Your home ice cream maker isn’t as cold and doesn’t churn as fast as the machines used by people who sell ice cream for a living.

This doesn’t seem like a big deal if you have some time to wait around for the ice cream to freeze. However, this gives any potential ice crystals a bigger window to form, rather than flash freezing the ice crystals within the ice cream (and preserving its creaminess).

This is the biggest reason why homemade ice cream gets icy.

A home freezer also isn’t the same as a commercial freezer, since it doesn’t have the same sensitive temperature sensors or powerful compressors offered by a commercial version.

This means that a residential freezer isn’t able to flag when the temperature is too warm or fix it as quickly or effectively as a commercial freezer would. This isn’t as big of an issue compared to the home vs commercial ice cream maker debacle, but it could mean the difference between protecting those small ice crystals you were so diligently working towards and letting those expand.

This recipe starts with the main star of the show, black sesame seeds. They get toasted until fragrant, which makes them taste more nutty and staves off any staleness from sitting around on a shelf for who knows how long.

Let the seeds cool, then mix with granulated sugar and blitz them up. This is the same method I use to add black sesame to butter mochi!

What’s the point of doing all this work? Well, you want the sesame to be finely ground so that their flavor infuses into the ice cream base more intensely and quickly.

This step also prevents you from biting into a whole sesame seed in your ice cream, which isn’t quite the creamy consistency we’re going for here.

I like using an immersion blender and a narrow, tall container, since it makes the process really easy. The shape of the container ensures that the blender’s blade is continually engaged, and it’s not spinning around aimlessly (like me, your typical 20 something in a quarter life crisis, but that’s a rant for a non-ice cream space).

You’ll know that the sesame seeds are finely ground enough when there aren’t visible seeds left, and the mixture looks like damp, grey sand. I swear it tastes better than it looks.

To the stove! The sesame sugar, along with some heavy cream, whole milk and salt go into a pot to warm up as well as dissolve the sugar into the dairy.

Then, in a bowl, whisk four egg yolks just to break them up before combining the eggs with the hot cream and milk mixture.

If there’s anyone to tag team in, now’s the time. To prevent the eggs from scrambling, you want to add the dairy a little bit at a time while you whisk constantly.

It’s much easier to have one person whisk the eggs while another person pours or ladles in the liquid, but with a bit of coordination, you can manage to do both by yourself.

When about a third of the cream has mingled with the eggs, you can add the egg and milk mixture to the rest of the contents in the pot. Then, place the pot back over the stove, and cook until it’s thickened.

You’re looking for a custard that coats the back of a spoon or spatula without dripping off immediately, or you can use a thermometer if that’s more your style.

Strain the ice cream base just to double check that there aren’t any rebel cooked egg bits in there, then stir in the vodka and let the base chill overnight in the fridge.

Your ice cream machine insert should be tucked into your freezer at this point. Gentle reminder to do that now before you forget and delay your ice cream eating for an extra day!

Having the ice cream (as well as your ice cream machine) as cold as possible gives you a leg up in the creamy texture department, since it’ll freeze more quickly and it’ll be less likely for big ice crystals to form.

The next day, pour the ice cream into your ice cream machine, and churn until the ice cream is much thicker, almost the texture of soft serve. Scrape into a container, cover and freezer overnight until firm enough to scoop!

Can’t find black sesame seeds? You could try to substitute the more commonly found tan ones. The flavor and definitely the color of the ice cream will be different though.

Contrary to what you might think, black sesame seeds are the unhulled iteration of tan sesame seeds, rather than the tan ones toasted until black. Tan sesame seeds are a bit more mild due to the lack of hull, so your ice cream would also likely end up more subtle in flavor.

Say you don’t have an immersion blender – that’s okay. I’d recommend using a small food processor or a small stand blender, so long as you scrape down the sides of the container frequently to make sure all of the seeds get some attention.

The problem with using a container or machine that’s too big is that the sesame seeds won’t get ground evenly enough, so I’d pivot to using a spice grinder if that’s available to you. Before anyone without a spider grinder yells at me, go on a field trip to try to find ground black sesame powder in the inner maze of the middle section of a Chinese grocery store, or online.

If you’re still out of options, then sorry buddy, you should probably find another kind of ice cream to make. How about some milk tea ice cream topped with brown sugar boba?

I don’t want anyone to be concerned about the ice cream tasting boozy – using alcohol here is about texture and not a sneaky drink. It’s so little that you won’t be able to taste or feel it.

That being said, maybe you’re serving this ice cream to someone who doesn’t want or can’t have alcohol, so you can definitely omit it. The flavor will still be spot on, even if the ice cream isn’t quite as creamy.

I prefer the texture of churned ice cream over no churn ice cream, although I get it if an ice cream machine isn’t in the cards for your kitchen adventures.

Instead, you could take the same approach of grinding the black sesame seeds down until they’re a powder (sans the sugar, since the sweetness of no churn ice cream typically comes from sweetened condensed milk).

Then, fold it into your whipped cream and condensed milk base (see this ginger and rose no churn ice cream for reference).

Freeze it, and you have black sesame no churn ice cream!

Probably goes without saying, but this ice cream needs to be stored in the freezer. It doesn’t have the same kind of stabilizers that commercial ice creams do, so I would recommend eating it within a week before it gets icy and/or strange.

This recipe is easy to make a half batch of, so that could be the way to go should you be unable to eat this much ice cream in a week (I believe in you though!). 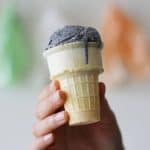 If you don’t have an immersion blender, a small food processor/stand blender or a spice grinder work instead. You can also try to find black sesame powder or ground black sesame seeds (they’re the same thing) in a Chinese grocery store.

The vodka is to help with the texture of the ice cream and not the flavor. You can omit if you need to.