summer berries and earl grey cream sounds summery, but maybe not explicitly fourth of july. let me explain. there's the very stereotypical red (strawberry), white (whipped cream) and blue (blackberries and blueberries). it's a nod to america's english roots, due to the british propensity for tea and tea time, as well as wikipedia's claim that brits find earl grey to be "posh." and did i mention that berries and cream is a traditional english dessert? but this version is also very american/millennial.

i was originally planning on making this as a traditional ice cream, then it evolved into no churn ice cream, and then all of a sudden i had a bowl of whipped cream. millennial laziness? perhaps. the berries could also be seen as a nod to the american willingness to turn everything into a "superfood," including berries.

and because i don't know when to stop: here’s a link to fall out boy’s "fourth of july". the dichotomy between posh summer berries and earl grey cream with pop punk (which i affectionately term emo music, though fall out boy is on the lighter/more mainstream side of the spectrum) is quite hilarious to me.

it's berries and cream, how could you go wrong? unless you don't like berries or whipped cream, at which point you are probably my brother. who only recently started adding beans to his burritos (previously only meat, rice, cheese and lettuce) because he thought his coworkers (he works at that fast casual chain known for charging extra for guac) would judge him.

ANYWAYS. the cream tastes light even though we know it isn't, and it has a hint of citrusy, and dare i say smoky, tea. i’m weary of labeling it as smoky since someone once unappetizingly described a blend of coffee as “smoky like a cigarette.” promise it’s not gross like that though.

you could change this up a bunch of different ways.

i used strawberries, blackberries and blueberries, but anything you like works. highly recommend mangoes if you're not going for that fourth of july color scheme.

you could do individual portions on a plate or in a trifle cup, or you could set a platter of fruit and a bowl of whipped cream on the table and let the animals have at it.

if you're looking for something with fruit and cream but have a little more patience and time and energy, then how about a strawberry lemonade cake with mint cream? 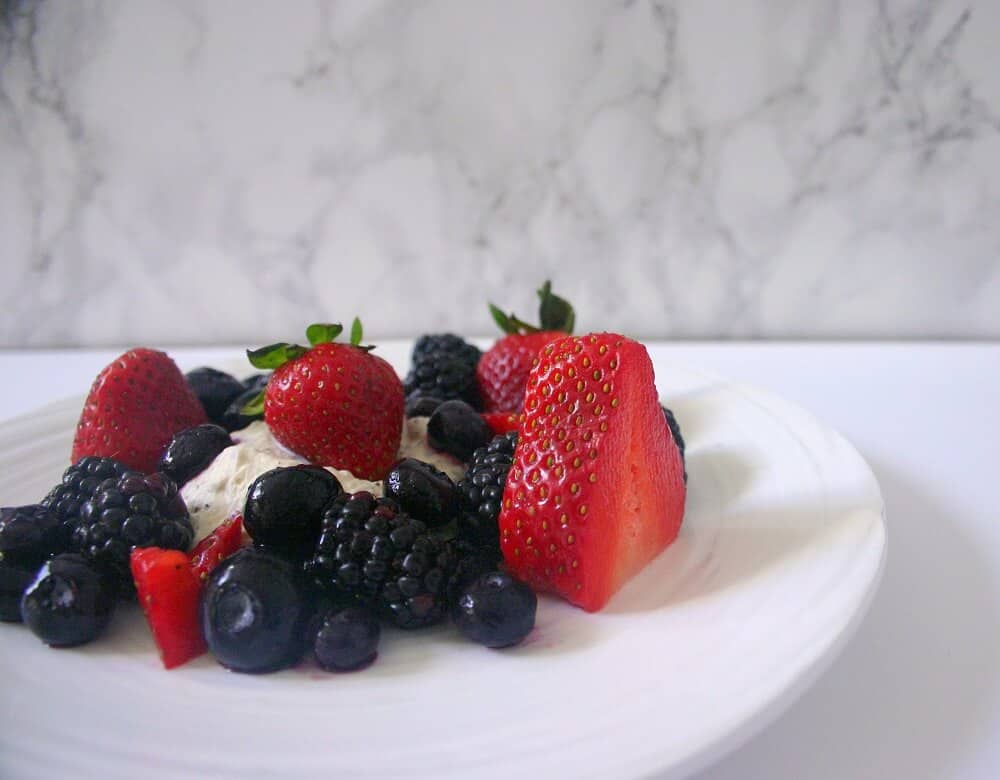 This dessert of summer berries and earl grey cream is simple but cures all of your juicy, sweet, creamy dessert cravings.