Loh máih chìh (Cantonese) or nuò mǐ cí (Mandarin) is a kind of Chinese sweet made with glutinous rice flour, filled with crushed peanuts and coated with coconut.

The outside wrapper is chewy and bouncy thanks to the glutinous rice flour, similar to the texture of nián gāo (a chewy sweet rice cake), taro mochi, or tāng yuán (filled sweet dumplings usually eaten in soup).

The key ingredient for giving loh máih chìh its texture is glutinous rice flour. This can be found in Asian grocery stores in a box like from Koda Farms, or in a plastic bag with green printed font on it.

Make sure it says "sweet rice" or "glutinous" on it; otherwise, you might be buying rice flour, and you won't get the same springy quality that the glutinous rice flour has.

The filling is made with roasted peanuts, sesame and powdered sugar.

It's crucial to toast the peanuts until they are pretty dark - otherwise the peanut flavor can get kind of lost with all the mochi. You also get a really nice deep color that helps give the final dessert more contrast between the golden brown peanuts and the white mochi.

Sesame seeds in the filling are optional, though I like the nuttiness they add without making the filling 100% peanuts.

The loh máih chìh wrapper isn't that sweet by itself, so the filling needs to do its part too. Powdered sugar is nice to use here so you don't get those gritty sugar bits from brown or granulated sugar.

Each piece of loh máih chìh gets coated in desiccated coconut, which serves two purposes. Obviously it adds a hint of coconut flavor and some texture, but it also makes sure that each plump ball doesn't stick to whatever surface you store it on after assembling.

The two main pieces of must have equipment are a steamer and a pair of vinyl food-safe gloves.

The steamer is easy enough to cobble together a makeshift version at home if you don't have one. Set up a little rack in the middle of a wide, shallow pot with a lid, and you can suspend a bowl or pan on that rack above the steaming water in the pot.

The gloves are a must - no amount of oil will prevent the mochi from sticking to your hands, and I find that trying to dust the mochi with coconut or rice flour tends to make closing the mochi later on more difficult.

I like to use clear vinyl gloves that are food-safe (they shouldn't be medical grade or have powder), but these were surprisingly difficult for me to find. I wouldn't recommend a drug store or a convenience store (no luck there), though you might have luck if you take a close look at the non-food aisles in an Asian grocery store.

Cupcake liners are nice to serve these in to minimize the risk of having to de-tangle one piece from another in the communal potluck container. The coconut should do its job to prevent stickage though, so if you don't have any on hand or you don't want to use them, that works too.

You mix glutinous rice flour, granulated sugar, salt and water into something that is thin enough to be poured. Don't worry about how liquidy it might seem right now, since it will firm up once you steam it.

This mixture goes into a steamer and cooks for 10-25 minutes, depending on how much you're making and the size and shape of the bowl you're using to hold the batter. I'd recommend using a container that has straight sides to encourage the batter to cook evenly.

If you don't have something that fits your steamer and those specifications, no worries. Just keep an eye on the batter, and if you notice the edges are cooking faster than the middle (ie the edges are firm and more matte looking, compared to the center being liquidy when poked), stir it around. It's fine if the dough looks lumpy during/after stirring.

Let the dough cool slightly. You're aiming for something that isn't so hot that your body will wonder why you're lowkey a masochist, but also not something so cold that the dough will be uncooperative when you try to coax it into doing your bidding.

While the dough is coming down to a manageable temperature, make the peanut filling. It's not the time to be lazy and roughly chop the peanuts; having big pieces makes it hard to close the loh máih chìh.

Once the peanuts are finely chopped, you can mix in some sesame seeds (preferably not black ones, though that's more for aesthetic reasons than important ones) and powdered sugar.

This is an occasion when readying all the parts before you start assembling is a good idea. Keep your filling close, have cupcake liners laid out, spread out some coconut on a plate, get those gloves on.

Divide the rice dough into 24 equal portions. I usually work with ⅙ of the dough at a time, divide that portion into quarters, and with the other three pieces I'm not working with, let them rest on top of the coconut so they don't stick.

Then with one portion of the dough, flatten it by smooshing it between your palms. You're looking to make a circle, not an oval, so if you notice that it's getting dangerously blobbish, move your palm around to re-shape it into a circle.

Ideally the dough should be pretty thin so you don't get stuck with a dough-only, no-peanut bite. If you accidentally make a hole, no sweat, just mush the dough back together and try again.

Once you have a dough circle, spoon in about one teaspoon's worth of filling into the center.

Gather the edges towards the middle, like a síu lùhng bāau, rather than a half moon. This will make it easier to get your dumpling into ball and not a playdough wannabe. Make sure it's sealed so no filling leaks out.

If your loh máih chìh isn't the desired shape yet, it's okay. Once you roll it around in the coconut to coat, it will help smooth things out (and if not, this site is named delicious not gorgeous after all).

Food made with glutinous rice flour tends to be best on the first day, and this recipe is no exception. You can store this dessert at room temperature for about 1-2 days, but it's peak soft and squishy on day one and gets a little bit firmer on day two.

After a day of sitting out at room temperature, the texture can be kind of a wildcard: the mochi can get kind of stiff and the peanuts start to lose their crunch. If you want to keep the loh máih chìh for longer, freeze them until you want to eat them. Defrost thoroughly then enjoy!

I would not recommend refrigerating them, since this will make the outside really hard and unpleasant.

You can definitely change the yield of this recipe. If you want a little treat for your household, it's easy to cut the recipe into 4 servings (especially if you use a scale to measure your ingredients).

Changing the yield of the recipe will change how long it cooks for though - if you're making more than the original 24 servings in this recipe, it may take longer (and vice versa if you make less than 24 servings).

If you have coconut milk on hand, consider using half coconut milk and half water in the batter. It adds a teensy bit more coconut perfume to the whole shebang, which I love.

If you're not into coconut, why are you here? Kidding, kidding. You can coat the dumplings in more glutinous rice flour (some sites recommend microwaving or toasting this flour to get rid of that raw chalky flavor), and use only water in the batter.

You can also try cooking the batter in a microwave. I've done this for other types of glutinous rice desserts (especially Japanese-style mochi), so I know it would work, though I'm not sure about the particular timing for this recipe.

If you do try to microwave the dough here, I'd suggest starting with five minutes, along with checking on it more frequently and stirring. Let me know how it goes if you do try this!

On another note, I've never heard of, made or tasted this, but the idea of honey roasted peanuts in the filling sounds so tasty! You wouldn't have to sweeten the filling, and the crispy, honey caramel on the outside of the peanuts would be so good with the chewy outside. 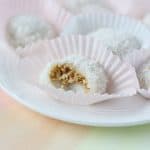 This chewy, bouncy dessert gets its texture from glutinous rice flour! They're filled with crunchy peanuts and dusted in plenty of coconut.

You can change the yield of this recipe, so long as you change the cooking time accordingly (if it's a smaller amount, start checking the batter sooner).

If you'd like, you can swap out part of the water with coconut milk.