How to Make Furikake Chex Mix

To start this Hawaiian snack, you heat butter, corn syrup, soy sauce, sugar and oil together in a pot. Once the butter is melted and everything looks homogenous, you pour it over your cereal and mix until each piece is glossy and coated with the sauce. You then sprinkle a bottle of furikake into the bowl, and stir again. The mix gets spread onto baking sheets and it dries out in the oven for an hour before you can devour!

What are the components of Chex mix?

For the mix-ins, I usually stick to Chex cereal and call it a day, but you can add anything. I typically see honeycomb cereal, pretzels and popcorn used in furikake Chex mix.

I also sprinkle the furikake onto the Chex mix as I stir it in, since it’s hard to evenly distribute it otherwise in the mix if you add it earlier.

If you’re not familiar with furikake, it’s a Japanese seasoning typically used for topping rice. It’s made with roasted seaweed and sesame seeds, though there are variations with everything from bonito flakes (made from salted fish, it’s delicious I promise) to umeboshi (salted plum) to wasabi and chiles. I like using it on baked sushi and Spam musubi with egg for a little extra crunch.

How do you fix a Chex mix that is too salty?

Before you bake the Chex mix, I would recommend tasting a piece. If it’s too salty for you, you can add more cereal to help dilute the level of seasoning.

It’s best to adjust the amount of mix-ins before you bake it so that the new mix-ins get some flavor, and whoever eats those bits isn’t stuck with a plain piece of cereal. It also lets all the cereal crisp up in the oven, which helps the snack taste fresher if you’re using older or slightly stale cereal.

How do you make Chex mix not soggy?

Once you mix everything together, you have to bake the Chex mix to dry it out. There’s a lot of moisture from the corn syrup, butter and soy sauce, so baking it makes sure that it doesn’t get soggy as it sits (because there’s no way you can polish off a whole batch right after mixing it, no matter how much you try to shovel into your mouth).

It also helps preserve the Chex mix longer, since it’s less likely to go bad or get moldy if it’s less moist.

How do you know when Chex mix is done?

When it’s done, it’ll clump together, and you won’t be able to break it into bite-sized pieces without hearing a snapping sound. It’ll be really brittle and crispy to the touch, and it shouldn’t bend before breaking.

If it doesn’t seem crispy or dry enough, return the Chex mix to the oven and check every 5-10 minutes until it’s done.

How long is homemade Chex mix good for?

The seasoning sauce helps preserve the Chex mix for about a week. If you can’t eat the whole batch within that time frame, I’d recommend sharing with your friends and family, or halving or quartering the recipe.

Why is Chex mix so good?

Cliché, but it’s a good mix of salty and sweet. The savory, sesame-y furikake balances out that sticky, caramelly brew used to force the furikake to cling to the cereal.

I love crunchy snacks too, and the sound and texture of this one is so satisfying. Definitely more of a snack meant for a loud Japanese American basketball tournament, rather than trying to sneak a handful when you’re not supposed to in a meeting or a lecture. 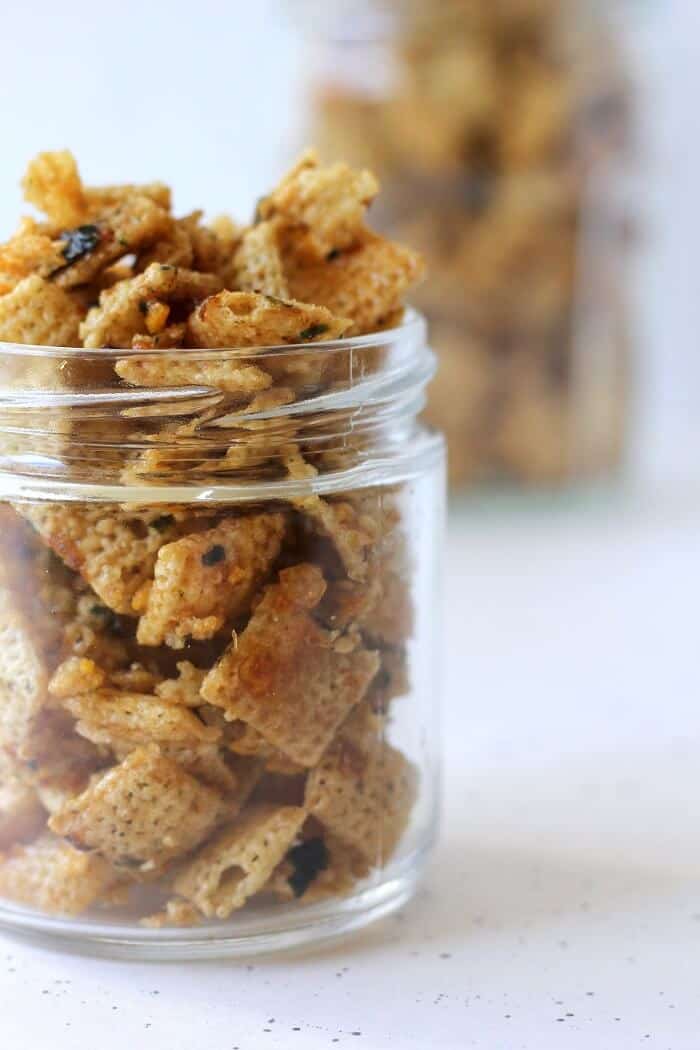